TV
Live coverage on RTÉ2 (from 1.30pm) and Sky Sports Arena, with highlights of the game, along with all the weekend's action, on The Sunday Game, RTÉ 2, from 9.30pm.

Also live outside of Ireland and the UK on GAAGO

Galway and Clare couldn't be separated last week after a pulsating 90 minutes (and the rest) at Croke Park that ended 1-30 apiece after extra-time.

With the Dubs and Roscommon booked in for a Super 8s dead rubber at Croke Park, we go to what is expected to be a sold-out Thurles for round two.

The Tribesmen ran away with it early on before Donal Moloney and Gerry O'Connor brought Colm Galvin back as a sweeper and restricted the supply. Will the champions have a plan to counteract the sweeper this time?

Clare first took the lead after Aron Shanagher's goal in the second period of extra-time but had they not hit seven wides in the first 10 additional minutes they might now find themselves preparing for an All-Ireland final rather than this replay. 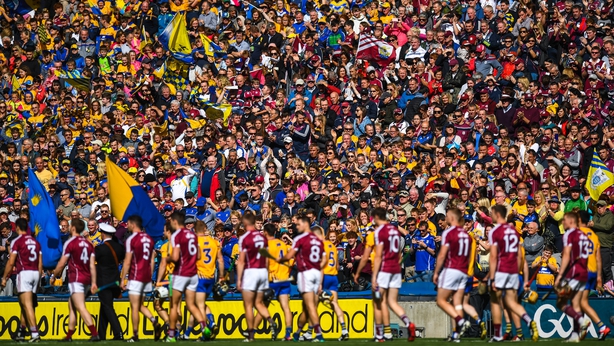 Ger Loughnane believes that the larger pitch at what is expected to be a sold-out Semple Stadium won't suit the Banner but it didn't stop them beating Tipperary there in June.

But the Banner don't have to look too far back, five years to be precise, to a game where they prevailed in a replay at the business end of the season.

A lot will depend on the fitness of some key Galway players, even if they're named to start: Joe Canning, Gearóid McInerney and Conor Whelan all left the field with knocks while Adrian Tuohy also picked up an injury.

Clare have taken the unusual step of delaying naming their team until throw-in. It suggests there are injury concerns, though, in practice, many inter-county teams' pre-match selections are tinkered with on the day in any case.

The Clare team has not yet been finalised and will be named shortly before throw-in on Sunday. pic.twitter.com/U2eI5TwyEN

"The pressure is firmly on Galway and it all depends how they deal with that.

"A few of their bigger players didn’t perform to the level that they can in the drawn game.

"Galway started like All-Ireland champions should and looked like blowing Clare away in the first 15 minutes then took their foot off the pedal a little, and Clare’s positional and tactical changes helped them to claw their way back into the game.

"In extra-time, Galway again put themselves in a position to win the game but didn’t, so the big question is – do they have the killer instinct to finish off teams? You would have to say no. We saw it in the Leinster final and replay against Kilkenny, we saw it again last Sunday.

"You have to give great credit to Clare for fighting back and if anything I think the momentum is now in their favour.

"Clare won’t be happy with how they started the last time. Their full-back line and goalie looked very jittery in the first 20 minutes and they shipped 1-4 in mistakes. Donal Moloney and Gerry O'Connor won’t be happy with that and will look at putting it right.

"If they can get things right at the back and get more of their forwards firing, they’ll cause Galway serious problems. I can see them winning but they can’t afford to start like they did in the first game."

Weather
Sunday will be mostly dry with highs of 19 to 25 degrees. For more see met.ie