Dublin’s All-Ireland match winner Dean Rock says he loves the pressure of free-taking, but admits some valuable lessons came into play for his final point of the game.

The Ballymun Kickham’s man claimed the final score of an absorbing contest in the seventh minute of injury-time, with his free inside the 45-metre line sailing between the posts to ensure the men from the capital made it three-in-a-row on a scoreline of 1-17 to 1-16.

Dublin's match-winner Dean Rock: Diarmuid did very well to win the free and it's my job to put it over. #DUBvMayo #RTEgaa pic.twitter.com/aqx5ul7iJ8

The normally deadly accurate forward was off-radar early in the contest with a couple of uncharacteristic efforts from both play and placed balls, but came good when it mattered most to seal yet more silverware for Jim Gavin’s side, and finished with a tally of seven points.

"I was just absolutely delighted the ball went over the bar. Diarmuid did very well to win the free and it’s my job to put it over the bar," he told RTÉ Sport.

"Thankfully it went over."

Back in April, Rock lined up to take a 48-metre free as the clocked ticked into the fifth minute of injury-time against Kerry in the League Final.

"I love being in those situations. I missed a kick in the League Final to get a draw and I learned lessons from that.

He drove the ball towards the Hill 16 end where it dropped off the right hand upright, and the Kingdom edged past by the bare minimum. This time there was no mistake.

"I love being in those situations. I missed a kick in the League Final to get a draw and I learned lessons from that.

"I struck it well and the rest is history."

Rock also paid tribute to their opponents, who again return west after again falling short on the biggest stage.

"When we come up against Mayo, there’s always a point in it. Thankfully we’ve been on the right side of it.

"They are a fantastic side and bring out the best in us. 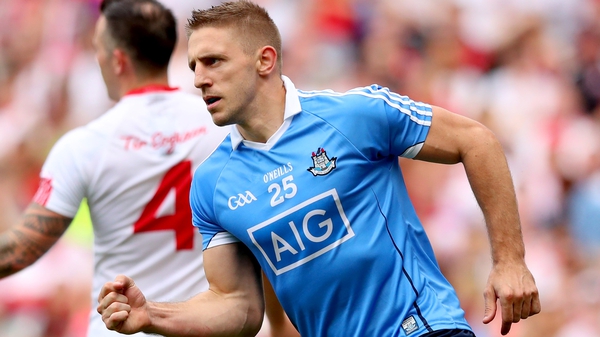