Colm O'Rourke described the All-Ireland quarter-final fracas involving Armagh and Galway as "pure thuggery" and took aim at the Armagh County Board.

O'Rourke said personal responsibility needed to be taken for Sunday’s unsavoury scenes, rather than seeking mitigating factors such as teams going down the same tunnel and extended panels being allowed on the pitch.

Although Galway were involved in a similar incident during last year’s Connacht final against Mayo at Croke Park, O’Rourke believes the Armagh County Board should shoulder the most responsibility for the brawl after it appealed suspensions given to Armagh players following incidents against Tyrone and Donegal earlier this season.

Speaking to the RTÉ GAA Podcast, the two-time All-Ireland winner said: "People are trying to use nice words but for me it was just pure thuggery, and it should be called out as such.

"People shouldn’t be saying teams need to go in different entrances. Soccer and rugby teams walk in beside each other at half-time. Why do they not beat the living daylights out of each other?

"The common denominator unfortunately in this has been Armagh this year. This is the third incident they have been involved in. They were involved in a very big incident a few years ago at U20 level when 10 players were suspended.

"The responsibility for players and discipline falls back on a county board. And if a county board continually appeals the decision by a central body then they’re basically saying to their players, 'you can do what you like and we will back you and try to get you off’.

"We had the incident with Tyrone earlier in the year where five players were sent off for contributing to a melee. And then when Armagh had the problem with Donegal, they appeal and got their players off.

"The rule of law did not apply, the referees were undermined. You had a Central Hearing Committee undermining the decision of another GAA body. It has brought about a shambolic situation.

"If those suspensions had stuck earlier in the year I’m quite sure we’d have a much better level of discipline. I feel really sorry for the referees in these particular cases, that it’s been brought to this level. If they make a decision and send it in, it’s very likely to be overturned, as we have seen in hurling as well."

Once the Armagh and Galway players returned to the pitch for extra-time, referee David Coldrick brandished red cards to Aidan Nugent and Seán Kelly, despite replays suggesting the pair were acting as peacemakers.

"It wasn’t a good day for the officials," said O’Rourke. "They allowed so much extra time. The whole thing was a shambles and I can imagine the Mayo and Kerry players and officials inside must have been really annoyed by what was allowed to happen.

"The referee and his officials had about 20 minutes [after the end of normal time]. They could have gone in and looked at a television screen inside and they’d have known exactly what had happened by the time the players came back out on the field.

"Then we had the joke situation where two players were sent off, but both teams still had 15 players [for extra-time].

"It was a brilliant game really marred by disgraceful scenes." 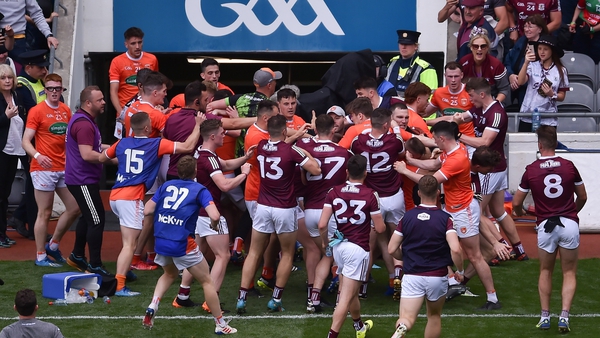