Colm Cooper believes more stringent sanctions need to be introduced to stamp out the type of brawl that occurred during the All-Ireland SFC quarter-final between Galway and Armagh.

A enthralling encounter which went all the way to extra-time and a penalty shootout victory to Galway was marred by a ugly scenes between panel members from both sides as they made their way towards the Croke Park dressing rooms at the conclusion of the initial 70 minutes of action.

His manager Pádraic Joyce said the incident "has no place in the GAA", a sentiment echoed by Armagh counterpart Kieran McGeeney.

And speaking on the RTÉ's The Sunday Game, Kerry great Cooper said the GAA needs to look to issue harsher punishments for those types of incidents.

"Are the GAA's penalties severe enough? Are they dealing with these in an appropriate way?" he queried.

"Are they doing enough? Because they come and we see them in club games, we see it in inter-county games."

He said that "harsher penalties and more severe" punishments were required, with the "disgraceful" eye-gouge as an example.

But Cooper felt the decision to issue red cards to Armagh's Aidan Nugent and Galway's Seán Kelly did not make sense given they were not at the centre of the flashpoints that occurred.

"Two guys I have sympathy for and can't understand is Seán Kelly and Aidan Nugent," he said.

While the brawl tarnished what had been an outstanding game, three-time All-Ireland winner Seán Cavanagh also felt a penalty shootout was not an appropriate way to decide fixtures.

"At this stage of the championship I think it's totally unacceptable to lose an All-Ireland quarter-final on penalties," he said.

"It's not the fundamental skills of the game and we all were looking for more. Bringing those two teams to Croke Park next weekend would have been what everyone wanted.

"An extra week in the championship at this stage was in my mind, what should be happening here." 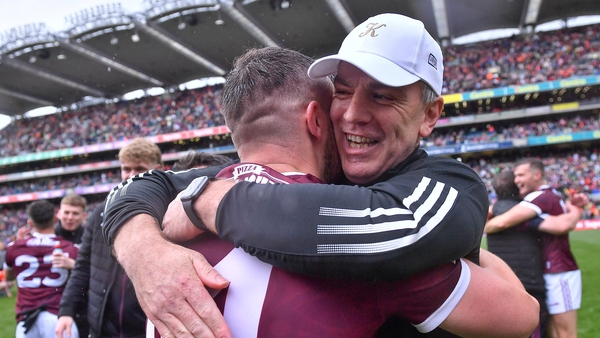 Joyce: Choice of penalties by the GAA is 'disgraceful'