Online
Live blog on RTÉ.ie and on the RTÉ News Now app from 3.45pm

Television
The Sunday Game Live on RTÉ 1 Television from 1.10pm with commentary from Marty Morrissey and analysis by Dessie Dolan

This isn’t exactly one to get the pulses racing and early reports suggest that the crowd could be as low as 35,000 at GAA Headquarters.

Dublin fans are confident of getting to the Super 8, the new, extended All-Ireland quarter-final stage, and with it two extra games, including one on the road so they may be keeping their cash in their pockets.

Laois supporters are coming at this from a different perspective – the Dubs routinely give Leinster opposition a hiding at this time of year and they might not see the value in making the trip to Croke Park.

The Boys in Blue are going for their eighth provincial title on the bounce and their 13th in the past 14 seasons, the sole blip their semi-final defeat to Meath in 2010.

These sides' last five Championship meetings, stretching back to 2007, have brought Laois five defeats on a combined scoreline of 39 points. In 2016 and 2014, their most recent duels with the serial All-Ireland winners, they’ve conceded 2-21 in eleven point defeats.

In the Allianz League, there were 23 places between these two counties – Dublin won Division 1 and Laois finished on top in Division 4. The O’Moore County are undoubtedly moving in the right direction under John Sugrue, but they have a lot of ground to cover still.

Less successful counties often look to Kerry as the font of football wisdom and appoint a manager from the Kingdom in the hopes of improving their fortunes. Sometimes it works, sometimes it doesn’t.

The appointment of Sugrue (pronounced Shook-rue in Kerry), has certainly worked for Laois. The Renard man won four county titles as a player with divisional side South Kerry, playing alongside the legend that is Maurice Fitzgerald, among others.

He has taken them from the lows of Division 4, winning the title on the way to promotion, and in to a Leinster final in his first year in the job. That’s progress.

He says his team are going out to attack this game and that’s admirable. But perhaps what should be most important to him at this stage is protecting his team for the future, both short and medium-term. Getting eaten alive at Croke Park may not be good for them over the remainder of this season, or for next.

They will be without captain Stephen Attride, who suffered a fractured skull in the semi-final win over Carlow. That came after they lost the services of Danny O’Reilly, who was injured in a night-time attack in Carlow after the Division 4 final win and he has only recently returned to light training.

Dublin too could be without their captain, with goalkeeper for the ages Stephen Cluxton a doubt following a clash in the comfortable semi-final win over Longford left him nursing sore ribs.

If he doesn’t start, and we won’t know until shortly before throw-in regardless of what team manager Jim Gavin announces, it’ll be the first time he won’t have started a Championship game for his county since the 2004 Leinster defeat to Westmeath, which he sat out having picked up a suspension following a red card against Armagh the previous year.

If he doesn’t play and is replaced by Evan Comerford, it will be interesting to get this glimpse into the future – a Dublin team without Cluxton and Diarmuid Connolly.

Form Guide: Dublin have only lost one game in Leinster in the past 14 seasons. Anything other than a convincing win would be a surprise despite Laois's recent improvements.

Weather: It’s going to be a warm one – highs in the mid-20s forecast and plenty of sunshine with moderate breezes. Players and fans will need the suncream.

Follow all the football action this weekend via our live blogs on RTÉ.ie and the News Now App, watch exclusive television coverage of Cork v Kerry (Saturday), Donegal v Fermanagh, and Dublin v Laois on RTÉ1, or listen to exclusive national radio commentary of all games on RTÉ Radio 1. Highlights on The Sunday Game at 9.30pm on RTÉ2. 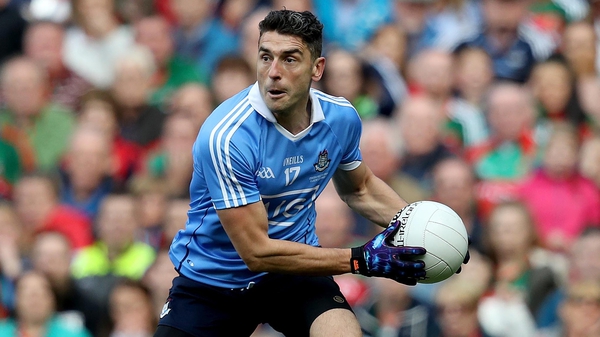 Bernard Brogan back in training for Dublin