By Ed Leahy at Turner’s Cross

Ireland were shocked by Belarus in their final fixture ahead of Euro 2016, going down 2-1 at Turner’s Cross tonight.

A goal in either half gave the visitors a surprising, yet not undeserved 2-0 lead, before Ireland kicked into top gear with Stephen Ward pulling one back in the 71st minute.

O’Neill’s side bombarded the visitors’ goal for the final twenty minutes but could not level matters despite their best efforts at the capacity Cork venue.

Ahead of the final squad announcement, Martin O’Neill’s midfield options appeared to be reduced by one as Harry Arter left the camp to be assessed as a result of the thigh injury that the Bournemouth man picked up in training on Monday.

And tonight’s midfield comprised of two men who would be vying for one of the last remaining slots in the Ireland 23 for France.

David Meyler started alongside Darron Gibson and were joined by Jeff Hendrick, Aiden McGeady and James McClean as the manager reverted to a 4-3-3 formation with Daryl Murphy leading the line.

It was a completely changed side from the 11 that took on the Dutch on Friday night and Shay Given was handed the number one jersey ahead of David Forde and Keiren Westwood. 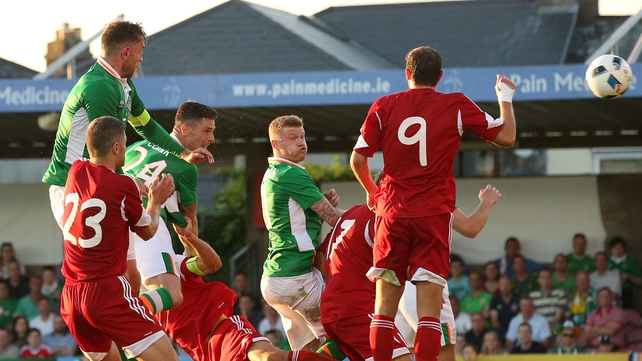 The Cork city venue was bathed in early summer sunshine and the vocal crowd enjoyed a lively start from the Irish second string with Stephen Ward and James McClean both looking lively, making several forays up the left flank.

Ireland had a great opportunity to open the scoring in the fifth minute as Ciaran Clark burst forward and worked the ball through Hendrick out to the ever-eager Ward.

The Burnley man’s whipped cross proved perfect for the arriving Clark but his glancing effort could not threaten the goal.

Belarus were not letting Ireland have it all their own way and a minute later pushed deep into the home side’s half, but a long-range effort by Siarhei Kisliak was high and wide.

If tonight’s game was an audition for some, Darron Gibson was a player that stood out in the opening exchanges as he looked very calm and composed in the middle of the park, spraying the ball about midfield at ease, while always looking for another option over the top.

David Meyler, playing alongside the Everton man in the middle of the park, looked quite the opposite and appeared uncomfortable on the ball and with his positioning.

While Ireland may not have been creating chances, they certainly never looked in danger of conceding.

But that all changed in the 20th minute as Mikhail Hardzeichuk curled an unstoppable effort into the top corner after a misplaced Meyler pass allowed the visitors to counter.

Given could not be faulted for the strike from about 25 yards out as the ball sailed well out of his reach into the far corner.

Ireland looked to hit back straight away as Cyrus Christie joined in the attack up the right flank, winning a free-kick for his efforts.

With no Robbie Brady on the field, McClean assumed free-kick duties but he could only smash the ball into the wall.

The ball fell for Meyler, who inadvertently played a one-two with the referee before hitting a decent effort on target but the ball was beaten away by the Belarus keeper.

But the visitors were not content to sit back, and almost doubled the lead in the 36th minute, again hitting Ireland on the counter-attack. 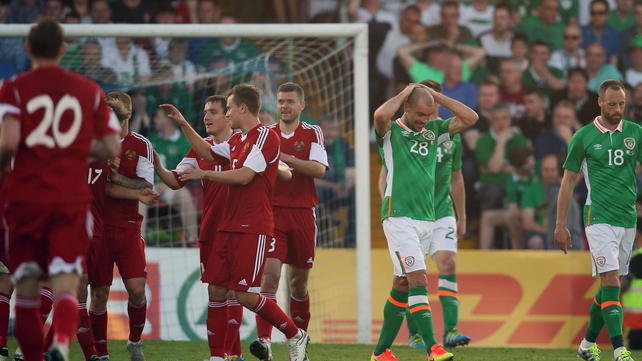 Another poor set-piece, this time from a corner, was cleared and Belarus broke up the left flank allowing Maksim Valadzko to cut inside and smash a fine effort goalwards.

But this time the Ireland keeper was able to get a strong hand on the well-struck effort and tipped the ball over the crossbar to keep the score at 1-0, which is how it remained until the break.

No changes at the start of the second half, although it looked a different Ireland that emerged, as they created two excellent chances in the opening ten minutes.

First McGeady found space down the right and clipped a delightful ball into the box where Murphy was able to make clean contact, but his header flew the wrong side of the crossbar.

Then Clark, once again, found himself in an advanced position as Christie dribbled down the right wing before whipping an excellent cross at pace onto the head of arriving Aston Villa man, but this time the keeper was well placed to gather.

The chances kept coming as Clark again proved excellent in the air and almost helped Ireland to an equaliser from a corner in the 59th minute, but somehow the ball stayed out with Hendrick then arriving at the back post, the keeper was forced to save well at his near post.

With Ireland completely controlling affairs, Valadzko got on the ball on the left wing and worked a neat ball inside before skipping past the retreating Christie.

The midfielder’s shot looked to be flying at the near post but it took a deflection and popped into the far corner past a static Given.

The reinforcements were summoned from the bench as Shane Long and Wes Hoolahan were sent on in place of Gibson and Murphy. Shay Given was also replaced by David Forde.

Moments later the deficit was cut to one as Ireland broke down the right flank. The ball drifted over to the back post beating everyone before Ward arrived to smash the ball home from about 12 yards. 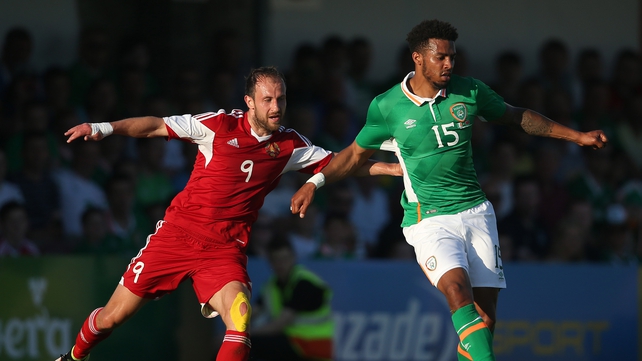 More subs followed as Callum O’Dowda, on for his debut, and Eunan O’Kane were introduced with 15 minutes remaining and moments later another Christie cross was helped goalwards by McClean but the ball dipped over the bar.

O’Kane then had a chance to get Ireland back on terms following some good work down the left by Hoolahan and O’Dowda but his shot sliced over the bar.

David McGoldrick was the next man in, joining Long in attack as Ireland pushed for that equaliser, with O’Dowda again getting on the ball and striding forward at pace, keen to make an impression.

And it was the Ipswich man who came closest as his last-minute effort sailed just past the near post with the keeper beaten by the deflection.

But despite their best efforts, Ireland could not find a way through the Belarus defence, and O’Neill’s side will quickly put tonight’s game out of their memory as they head to France for Euro 2016 on Wednesaday. 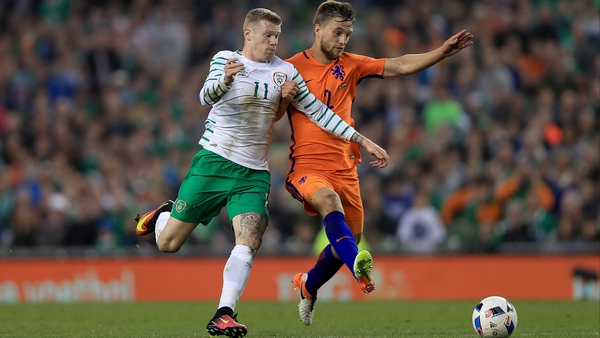