Lennox Lewis says he is "beyond words" after being asked to be a pallbearer at the funeral of Muhammad Ali.

Former world heavyweight champion Lewis, along with Hollywood actor Will Smith, were announced as pallbearers on Monday night.

Lewis issued a statement on Tuesday night to express his gratitude at the invitation.

"I am humbled, and honoured, beyond words to help see my hero, Muhammad Ali, off to his final resting place," Lewis said.

"Ali has always been an enormous inspiration to me, not only in my boxing career, but also in life. His journey began 74 years ago, and in that time, he not only transformed the world of sport, he used sport to transform the world.

"It's my extreme pleasure, and complete honour, to be asked to help him complete the final steps of his life journey."

Ali, formerly named Cassius Clay, died in Phoenix, Arizona, at the age of 74 on Friday evening local time. He had been admitted to hospital earlier in the week with a respiratory condition having suffered with Parkinson's disease for 32 years.

His family said in a statement that he died from complications related to his condition. The funeral is to be held in his hometown of Louisville at 2pm local time (7pm BST) on Friday.

Lewis reigned as undisputed world heavyweight champion after beating Evander Holyfield in 1999, while Smith was nominated for an Academy Award and a Golden Globe for his portrayal of Ali in the 2001 film of the same name.

A giant among men, Ali displayed a greatness in talent, courage & conviction, that most of us will EVER be able to truly comprehend. #RIPAli

The memorial service, at the KFC YUM! Centre in the Kentucky city, will be open to the public and streamed live on the internet for those unable to attend.

It will be preceded by a Jenazah - an Islamic funeral prayer programme - also for the public at midday on Thursday at the Freedom Hall, where Ali made his professional debut with victory over Tunney Hunsaker in 1960 and fought for the last time in Louisville against Willi Besmanoff a year later.

"Everything that we're doing here was blessed by Muhammad Ali, and was requested," said family spokesman Bob Gunnell, who broke the news of the former world heavyweight champion's death.

"We want this to be inclusive of everyone. That's why we set Freedom Hall - not just with its historical significance but with the size of Freedom Hall, so that everyone fits in.

"That Muslims and people of all faiths could attend, and perhaps learn more and be like Muhammad Ali, and open their hearts to everybody.

"This is not a political statement, this is not about politics, this is about how Muhammad Ali lived his life." 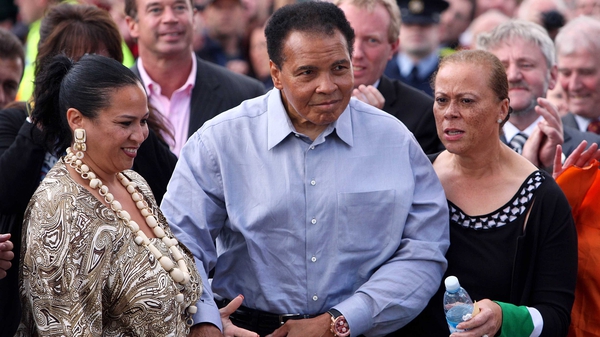