Desperate parents shouted at police to enter the South Texas elementary school where a massacre was unfolding on Tuesday, with some trying to approach the building themselves before being restrained by officers, according to videos recorded during the attack.

The videos emerging today, along with initial accounts of the shooting timeline from authorities, suggest up to an hour passed between the time the attack began and the moment specially trained officers breached the fourth-grade classroom where 18-year-old Salvador Ramos had killed 19 children and two teachers, shooting him dead.

The New York Times reported that most, if not all, of the victims of the worst school shooting in nearly a decade likely died in the first few minutes of the attack, citing a person familiar with a preliminary timeline compiled by investigators. 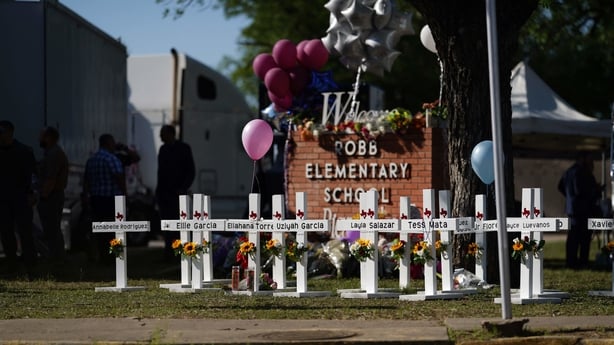 Authorities said Ramos was able to enter the school without any confrontation, contradicting earlier reports that a police officer engaged him outside the building.

Victor Escalon, a spokesman for the Texas Department of Public Safety, told a news conference that officers arrived and entered the school four minutes after Ramos, but took cover after Ramos fired multiple rounds at them.

An hour elapsed before a US Border Patrol tactical team breached the classroom and killed Ramos, Escalon confirmed.

There was no armed police officer stationed at the school.

Mr Escalon told reporters that the majority of shots were fired at the outset of the attack, based on preliminary information.

He described a chaotic scene after the initial exchange of gunfire, with officers calling for backup and evacuating students and staff.

Read more:
The victims who died at a school in Texas
Two decades of deadly gun violence in US schools

In one video posted on Facebook by a man named Angel Ledezma, parents can be seen breaking through yellow police tape and yelling at officers to go into the building.

"It's already been an hour, and they still can't get all the kids out," Mr Ledezma said during the video.

Another video posted on YouTube showed officers restraining at least one adult. One woman can be heard saying, "Why let the children die? There's shooting in there."

"We got guys going in to get kids," one officer is heard telling the crowd. "They're working." 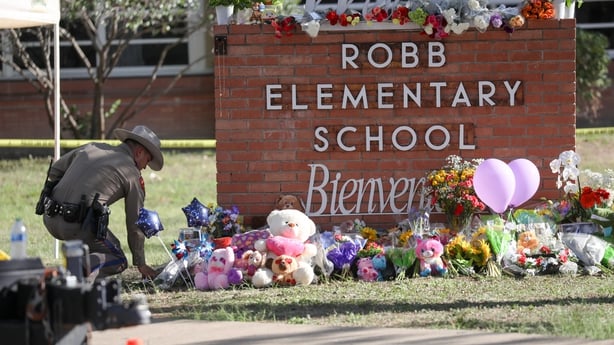 The shooting has reignited a national debate over the country's gun laws. President Joe Biden and his fellow Democrats have vowed to push for new restrictions, despite resistance from Republicans.

There were few warning signs: Ramos, a high school dropout, had no criminal record or history of mental illness.

Texas Governor Greg Abbott said yesterday that Ramos had written an online message to someone minutes before the attack saying he was about to "shoot up an elementary school".

Authorities said Ramos shot his grandmother in the face at the home they shared before fleeing and crashing his car outside Robb Elementary School sometime around 11.30am local time on Tuesday.

His grandmother, who is hospitalised and in a critical condition, managed to call police.

A spokesperson for the Texas Department of Public Safety, Chris Olivarez, told CNN that investigators were still trying to confirm a precise minute-by-minute account, including how long Ramos remained barricaded inside the classroom.

Ramos wounded two responding officers inside a hallway before barricading himself inside the classroom, Mr Olivarez said. 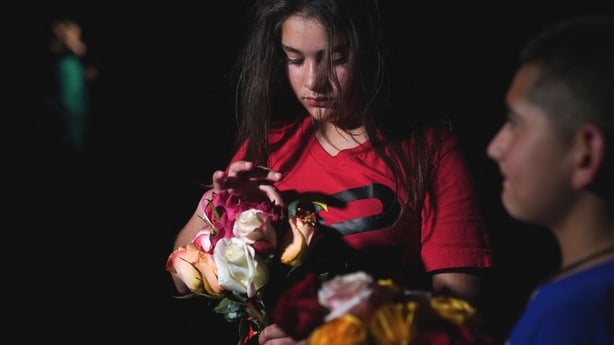 The attack drew a massive law enforcement response, including hundreds of officers, who encircled the building and broke windows in an effort to evacuate children and staff.

Eventually, members of a US Border Patrol tactical unit breached the classroom and apparently killed Ramos, with one agent wounded in the crossfire, officials said.

The Uvalde Police Department announced the incident was over shortly after 1pm.

Mr Olivarez said the attack lasted 40 to 60 minutes, though he could not say whether that time frame began when Ramos shot his grandmother or when the teenager arrived at the school. The FBI is working on obtaining surveillance video from school cameras.

At least 17 people were also injured, including children.

Victims' loved ones took to social media to express anguish over the loss of children who never came home from school.

"We told her we loved her and would pick her up after school," Kimberly Mata-Rubio posted on Facebook in a remembrance of her daughter, Alexandria Aniyah Rubio, a fourth-grade honour student.

"We had no idea this was goodbye."

The husband of a heroic fourth grade teacher who was killed protecting her students has also died, members of the teacher's family have said.

A GoFundMe page set up by Debra Austin, who said she was the cousin of teacher Irma Garcia, said that Irma's husband Joe "has tragically passed away this morning (5/26/2022) as a result of a medical emergency".

A local news anchor said that he had died from a heart attack, while family members posted online that he died "of a broken heart" and "due to grief".

The shooting came ten days after a white supremacist shot 13 people at a supermarket in a mostly Black neighborhood in Buffalo, New York.

In Washington, Democrats and Republicans in the Senate appeared far from any compromise on new gun restrictions.

Mr Biden, who has urged Congress to act, will visit Uvalde on Sunday along with his wife Jill, the White House has said.

The National Rifle Association's annual meeting starts tomorrow in Houston, where Republicans including Abbott, US Senator Ted Cruz of Texas and former President Donald Trump were scheduled to give speeches.

The gun rights group expressed sympathy for the victims but said the event would go on as planned. 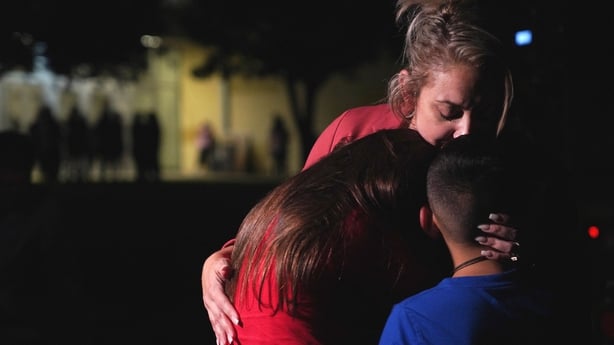 Shootings have become so commonplace in American schools that data shows a gun being fired almost every day this year on school property.

The Texas rampage is the deadliest US school shooting since a gunman killed 26 people, including 20 children, at Sandy Hook Elementary School in Connecticut in December 2012. Like that one, the Texas attack left parents across the country fearful and grieving.

Uvalde is a close-knit community of about 16,000 residents, nearly 80% of them Hispanic or Latino, according to US Census data. Many of its residents personally knew some victims, or their families, including the town official faced with the grim task of identifying the bodies.

President Higgins has written to @POTUS Joe Biden to express his heartfelt condolences following the tragic events that took place at Robb Elementary School in Uvalde, Texas. The President joined President Biden in expressing abhorrence at such acts and what stands behind them. pic.twitter.com/YcxBlcOrRL 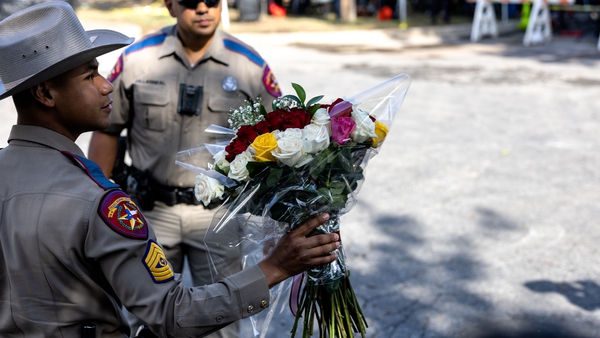