Ukrainian forces have launched a counteroffensive near the Russian-held town of Izium in eastern Ukraine, a regional governor said today, in what could prove a serious setback for Moscow's plans to capture the entire Donbas region.

Russian forces have focused much of their firepower on the Donbas in a "second phase" of their invasion that was announced on 19 April, after they failed to reach the capital Kyiv from the north in the early weeks of the war.

But Ukraine has been retaking territory in its northeast, driving the Russians away from the second-largest Ukrainian city of Kharkiv. Keeping up pressure on Izium and Russian supply lines will make it harder for Moscow to encircle battle-hardened Ukrainian troops on the eastern front in the Donbas.

Ukrainian President Volodymyr Zelensky also said complex talks were underway to find a way to evacuate a large number of wounded soldiers from a besieged steel works in the port of Mariupol in return for the release of Russian prisoners of war.

Mariupol, which has suffered the heaviest fighting in nearly three months of war, is now in Russian hands but hundreds of Ukrainian fighters are still holding out at the Azovstal steel works despite weeks of heavy Russian bombardment.

Western military analysts say Russian President Vladimir Putin and his generals failed to anticipate such fierce Ukrainian resistance when they launched the invasion on 24 February.

As well as losing large numbers of men and much military equipment, Russia has been hit by economic sanctions. The Group of Seven leading Western economies pledged in a statement today to "further increase economic and political pressure on Russia" and to supply more weapons to Ukraine.

"Our armed forces have switched to a counteroffensive there. The enemy is retreating on some fronts and this is the result of the character of our armed forces," he said.

Moscow's invasion, which it calls a "special operation" to disarm and "denazify" Ukraine, has jolted European security. Kyiv and its Western allies say the nazi assertion is a baseless pretext for an unprovoked war of aggression.

The war has prompted Finland to abandon its military neutrality and seek membership of NATO (North Atlantic Treaty Organization). Sweden is widely expected to follow suit.

Finnish President Sauli Niinisto told Mr Putin by phone that his country, which shares a 1,300km border with Russia, wanted to join NATO to bolster its own security.

Putin told Niinisto it would be a mistake for Helsinki to abandon its neutrality, the Kremlin said, adding that the move could harm bilateral relations.

Turkish President Tayyip Erdogan said yesterday it was not possible for his country, a NATO member, to support enlarging the alliance because Finland and Sweden were "home to many terrorist organisations".

The foreign ministers of Finland and Turkey were due to meet in Berlin today to try to resolve their differences over NATO accession.

Mr Erdogan's spokesman, Ibrahim Kalin, said that Turkey had not shut the door to Sweden and Finland joining but wants negotiations with both countries and a clampdown on what it sees as terrorist activities in Europe.

Mr Kalin said the Kurdistan Workers Party (PKK) - designated a terrorist organisation by Turkey, the United States and the European Union - was fundraising and recruiting in Europe and its presence was "strong and open" in Sweden in particular.

"What needs to be done is clear: they have to stop allowing PKK outlets, activities, organisations, individuals and other types of presence to ... exist in those countries," Mr Kalin said.

Read full coverage of the war in Ukraine here

One of the aims of Russia's action in Ukraine was to prevent the former Soviet republic ever joining NATO.

German Chancellor Olaf Scholz, who spoke to Mr Putin by phone on Friday, said he detected no sign of any change in the Russian leader's thinking on the conflict.

In an interview for the t-online news website published today, Mr Scholz said Western sanctions on Russia would remain in place until it reached an agreement with Ukraine, adding: "Our aim is for this invasion to fail".

In their statement, the G7 ministers - from the United States, Japan, Germany, Britain, France, Italy and Canada - also pledged to "expedite our efforts to reduce and end reliance on Russian energy supplies". 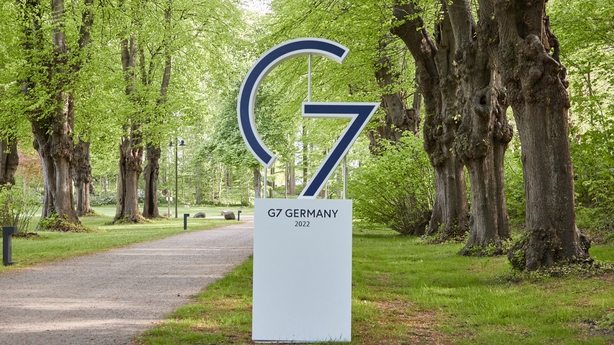 Russian Foreign Minister Sergei Lavrov said the West's sanctions amounted to a "total hybrid war" against Moscow but Russia would withstand sanctions by forging deeper partnerships with China, India and others.

As Russian and Ukrainian forces fought artillery duels on Saturday close to their shared border north of Kharkiv, Vera Kosolapenko, 67, wept as she stood in the still-smouldering ruins of her small home, struck by a Russian missile on Friday.

"I don't know how I will rebuild this house," she said as explosions echoed over her leafy village of Bezruky.

"I loved this place."

Ukraine's Mr Zelensky said complex negotiations were under way on the next phase of the evacuation mission from the Azovstal steel works in Mariupol, with international intermediaries involved in the talks.

Mr Erdogan's spokesman said Turkey had two weeks ago proposed carrying out a maritime evacuation of wounded fighters from the plant. The proposal remains "on the table" although Moscow has not agreed to it, he said.

Reuters could not independently verify the report.