Russia has warned it will have to take "military-technical" steps in response to neighbouring Finland joining NATO, after leaders in Helsinki backed entering the US-led alliance.

"The expansion of NATO and the approach of the alliance to our borders does not make the world and our continent more stable and secure," Kremlin spokesman Dmitry Peskov told reporters.

When asked whether Finland's membership would be a threat, Mr Peskov answered: "Definitely."

"Everything will depend on how this process takes place, how far the military infrastructure will move towards our borders," he said.

Russia's foreign ministry said Moscow would be "forced to take reciprocal steps, military-technical and other, to address the resulting threats to its national security".

It accused NATO of seeking to create "another flank for the military threat to our country".

"Helsinki should be aware of its responsibility and the consequences of such a move," the foreign ministry said.

Russian officials have spoken in the past about measures, including potentially stationing nuclear-armed missiles on the Baltic Sea.

Asked yesterday if Finland would provoke Russia by joining NATO, President Sauli Niinisto said: "My response would be that (Putin) caused this. Look at the mirror."

Earlier today, Finland's president and prime minister said they were in favour of joining NATO and a formal decision would be taken this weekend.

"Finland must apply for NATO membership without delay," President Niinisto and Prime Minister Sanna Marin said in a joint statement.

"We hope the national steps still needed to make this decision will be taken rapidly within the next few days."

Finland's political and public opinion swung dramatically in favour of membership after Russia sent troops into Ukraine on 24 February.

Finland shares a 1,300km border with Russia and has been militarily non-aligned for decades - NATO guards stationed there would be just a few hours' drive from the northern outskirts of St Petersburg.

It suggests Russia's invasion of Ukraine will bring about the very expansion of the Western military alliance that Vladimir Putin aimed to prevent.

The decision by the two Nordic countries to abandon the neutrality they maintained throughout the Cold War would be one of the biggest shifts in European security in decades.

NATO Secretary-General Jens Stoltenberg said the Finns would be "warmly welcomed" and promised an accession process that would be "smooth and swift".

Finnish membership would boost both Finland's security and that of the alliance, he said. 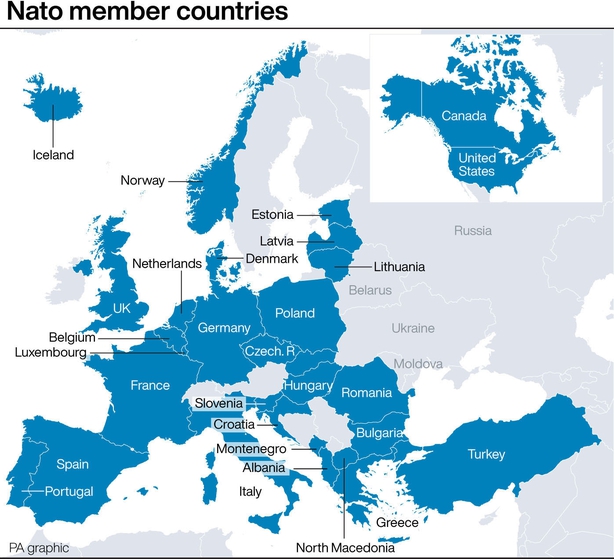 Five diplomats and officials told Reuters that NATO allies expect both countries to be granted membership quickly, paving the way for an increased troop presence in the Nordic region to defend them during a one-year ratification period.

Mr Putin cited NATO's potential expansion as one of the main reasons for Moscow's "special military operation" in Ukraine he launched in February.

Ukraine has long sought to join NATO, although it has lately offered to accept some form of neutral status as part of peace talks.

NATO describes itself as a defensive alliance, built around a treaty declaring that an attack on one member is an attack on all, which effectively grants US allies the protection of American superpower might, including its nuclear arsenal.

Moscow regards that as a threat to its influence in neighbouring countries.

But Mr Putin's decision to invade Ukraine has caused a shift in public opinion in the Nordic region, with political parties that had backed neutrality for generations now coming to embrace the view that Russia is a menace.

As the war in Ukraine continues today, three people have been killed and 12 others wounded in a Russian strike on a school in Ukraine's northern Chernigiv region, the emergency services said.

The council voted 33-2 in favour of a draft resolution brought by Ukraine to create an investigation into alleged violations in the Kyiv, Chernihiv, Kharkiv and Sumy regions in late February and in March, "with a view to holding those responsible to account".