This evening in Kyiv, there were reports of occasional blasts and gunfire, but it was not clear exactly where it was coming from.

The capital and other cities have been continuously hit by Russian artillery and cruise missiles.

A US defence official said Ukraine's forces were putting up "very determined resistance" to the three-pronged Russian advance that has sent hundreds of thousands of Ukrainians fleeing westwards, clogging major highways and railway lines.

"We have withstood and are successfully repelling enemy attacks. The fighting goes on," Mr Zelensky said in a video message from the streets of Kyiv posted on his social media. 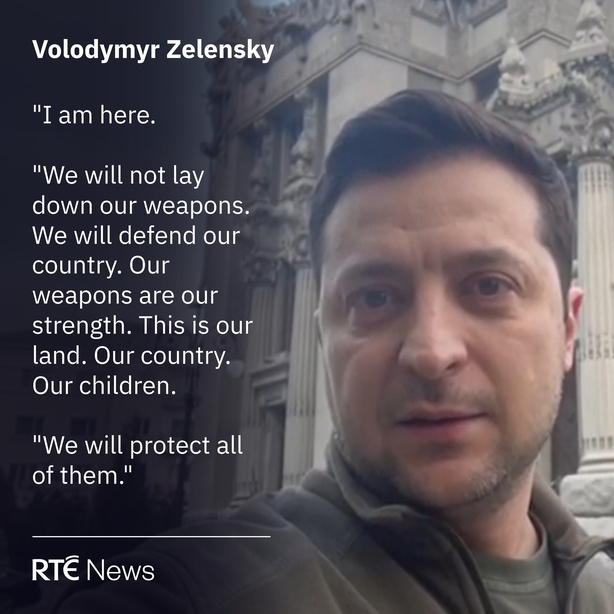 The Kremlin said its troops were advancing again "in all directions" after Putin ordered a pause on Friday.

Russia's assault is the biggest on a European state since World War Two and threatens to upend the continent's post-Cold War order.

The crisis has galvanised the NATO Western military alliance, which has announced a series of moves to reinforce its eastern flank. While NATO has said it will not deploy troops to Ukraine, a string of countries are sending military aid.

US President Joe Biden approved the release of up to $350 million worth of weapons from US stocks, while Germany, in a shift from its long-standing policy of not exporting weapons to war zones, said it would send anti-tank weapons and surface-to-air missiles.

Ukraine, a democratic nation of 44 million people, won independence from Moscow in 1991 after the fall of the Soviet Union and wants to join NATO and the EU, goals Russia opposes.

Putin has said he must eliminate what he calls a serious threat to his country from its smaller neighbour, accusing it of genocide against Russian-speakers in eastern Ukraine - a charge dismissed by Kyiv and its Western allies as baseless propaganda.

The United States has observed more than 250 launches of Russian missiles, mostly short-range, at Ukrainian targets, the US defence official said.

A Ukrainian presidential adviser said about 3,500 Russian soldiers had been killed or wounded and that Russian troops had not made serious gains on the third day of fighting. Western officials have also said intelligence showed Russia suffering higher casualties than expected and its advance slowing.

Russia has not released casualty figures and it was impossible to verify tolls or the precise picture on the ground.

"We know that (Russian forces) have not made the progress that they wanted to make, particularly in the north. They have been frustrated by what they have seen is a very determined resistance," the US official said, without providing evidence.

Chechen leader Ramzan Kadyrov, a close Putin ally, said today that his fighters were also deployed in Ukraine. He said Russian forces could easily take Kyiv and other large cities but their task was to avoid loss of life.

Kyiv's mayor Vitali Klitschko said there was no major Russian military presence in the capital, but that "saboteur groups" were active and he was imposing a curfew from this evening.

Ukrainians faced lengthy queues for money at cash machines and for fuel at petrol stations, where individual sales are mostly limited to 20 litres. Many shops in the city centre were closed and the streets were largely empty on Saturday afternoon.

"I was smart enough to stock up food for at least a month," said Serhiy, out for a walk before the curfew.

"I did not trust the politicians that this would end peacefully."

Footage released by Ukraine's state emergency services shows a rocket hitting a Kyiv apartment block this morning. Ukrainian officials say nobody was killed in the strike, and that Russia is lying about not shelling civilian infrastructure | Live updates: https://t.co/5GwvuL5NDs pic.twitter.com/45CtQsVDsO

At least 198 Ukrainians, including three children, have been killed and 1,115 people wounded so far in Russia's invasion, Interfax quoted Ukraine's Health Ministry as saying. It was unclear whether the numbers comprised only civilian casualties.

Interfax later cited the regional administration in Donetsk, eastern Ukraine, saying 17 civilians had been killed and 73 wounded by Russian shelling.

Moscow says it is taking care not to hit civilian sites.

Russia's Defence Ministry said its forces had captured Melitopol, a city of 150,000 in southeastern Ukraine. Ukrainian officials did not comment and Britain cast doubt on the report.

If confirmed, it would be the first significant population centre the Russians have seized.

The city of Mariupol, a key port on the Sea of Azov in southeast Ukraine, remained under relentless shelling on Saturday, its mayor Vadim Boychenko said in a televised address.

"They are shelling schools, apartment blocks," he said.

About 100,000 people have crossed into Poland from Ukraine since Thursday, including 9,000 who have entered since 7am this morning, Polish Deputy Interior Minister Pawel Szefernaker said.

"The Russian government is effectively saying that if their military goals are not met, they will broaden their advance" @tconnellyRTE with the latest on the Ukraine invasion, from the ground in Lviv | Live updates: https://t.co/WQ473iOMmh pic.twitter.com/hoAeQ0yYJV

"The most important thing is that people survive," said Katharina Asselborn, wiping away tears while waiting at the Polish border for her sister, aunt and her three children to arrive from their home in Ukraine's Black Sea port of Odessa.

"The last 30 kilometres to the border they went on foot."

Ukrainians were also crossing the borders into Hungary, Romania and Slovakia.

They have stopped short of forcing Russia out of the SWIFT system for international bank payments, though Germany's foreign and economy ministers and French presidential official indicated on Saturday that such a move may come soon.

Several European countries, including Russia's Baltic neighbours Lithuania and Latvia, said they were closing their airspace to Russian airliners.

The United Nations Security Council is due to vote tomorrow to call for a rare emergency special session of the 193-member UN General Assembly on Russia's invasion of Ukraine, which would be held on Monday, diplomats said.

The vote by the 15-member council is procedural, so none of the five permanent council members - Russia, China, France, Britain and the United States - can wield their vetoes. The move needs nine votes in favour and is likely to pass, diplomats said.

Only 10 such emergency special sessions of the General Assembly have been convened since 1950.

European Union foreign ministers will come together for a virtual meeting tomorrow to adopt further measures in support of Ukraine and against "aggression by Russia", EU foreign policy chief Josep Borrell said this evening.