Pope Francis has decried increasing polarisation in personal and international relationships, saying in his Christmas message that only dialogue can resolve conflicts ranging from family feuds to threats of war.

In his "Urbi et Orbi" (to the city and the world) message, he called on individuals and world leaders to talk to each otherr ather than dig in their heels, a distancing he said has been worsened by the Covid-19 pandemic.

"Our capacity for social relationships is sorely tried; there is a growing tendency to withdraw, to do it all by ourselves, to stop making an effort to encounter others and do things together," he said from the central balcony of St Peter's Basilica on a wet and windy Christmas in Rome.

"On the international level too, there is the risk of avoiding dialogue, the risk that this complex crisis will lead to taking shortcuts rather than setting out on the longer paths of dialogue. Yet only those paths can lead to the resolution of conflicts and to lasting benefits for all," he said.

"We continue to witness a great number of conflicts, crises and disagreements," he said, speaking from the same balcony where he first appeared to the world as pope after his election on 13 March 2013. 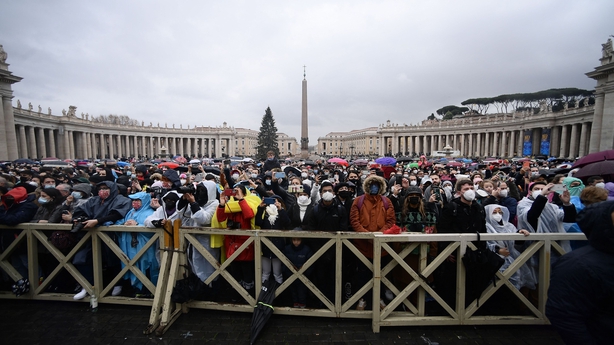 "These never seem to end; by now we hardly even notice them.We have become so used to them that immense tragedies are now being passed over in silence; we risk not hearing the cry of pain and distress of so many of our brothers and sisters," he said, speaking to an unusually small crowd reduced by Covid-19 restrictions and the weather to only several hundred.

He asked God to "give serenity and unity to families", praising those who strive to keep them and communities together in such divisive times.

"Let us ask him for the strength to be open to dialogue. On this festive day, let us implore him to stir up in the hearts of everyone a yearning for reconciliation and fraternity," he said.

He used the word "dialogue" 11 times in a speech of little more than two pages as he spoke to people huddled under rain coats and umbrellas.

Pope Francis asked God to "prevent fresh outbreaks of along-festering conflict" in Ukraine, which has accused Russia of massing tens of thousands of troops in preparation for a possible large-scale military offensive.

Russia denies planning any attack and accuses Ukraine and the United States of destabilising behaviour, saying it needs security guarantees for its own protection.

He asked people not to be indifferent to the plight of migrants, refugees, the displaced, political prisoners and women victims of violence and urged leaders to protect the environment for future generations.

In his Christmas Eve Mass last night in St Peter's Basilica, Pope Francis said that people who are indifferent to the poor offend God, and urged all to "look beyond all the lights and decorations" and remember the neediest.