Pope Francis has said that people who are indifferent to the poor offend God, urging all to "look beyond all the lights and decorations" and remember the neediest.

Francis, ushering in the ninth Christmas of his pontificate, celebrated a solemn Christmas vigil mass at St Peter's Basilica in the Vatican for about 2,000 people, with participation restricted by Covid-19 to about one fifth of the size of pre-pandemic years.

Pope Francis, wearing white vestments, wove his homily around the theme that Jesus was born with nothing.

"Brothers and sisters, standing before the crib, we contemplate what is central, beyond all the lights and decorations, which are beautiful. We contemplate the child," he said in the homily of the mass concelebrated with more than 200 cardinals, bishops and priests. All but him wore masks.

The pope, who turned 85 last week, said the baby Jesus born in poverty should remind people that serving others is more important that seeking status or social visibility or spending a lifetime in pursuit of success.

"It is in them (the poor) that he wants to be honoured," said Francis, who has made defence of the poor a cornerstone of his pontificate.

"On this night of love, may we have only one fear: that of offending God's love, hurting him by despising the poor with our indifference. Jesus loves them dearly, and one day they will welcome us to heaven," he said. 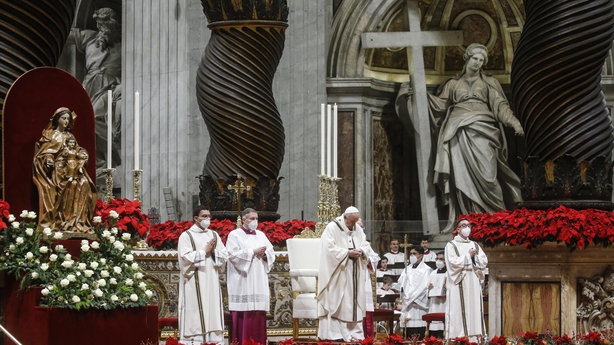 Pope Francis quoted a line from a poem by Emily Dickinson - "Who has found the heaven - below - will fail of it above" - and added in his own words: "Let us not lose sight of heaven; let us care for Jesus now, caressing him in the needy, because in them he makes himself known."

Saying that working people - the shepherds - were the first to see the baby Jesus in Bethlehem, he said labour had to have dignity and lamented that many people die in workplace accidents around the world. 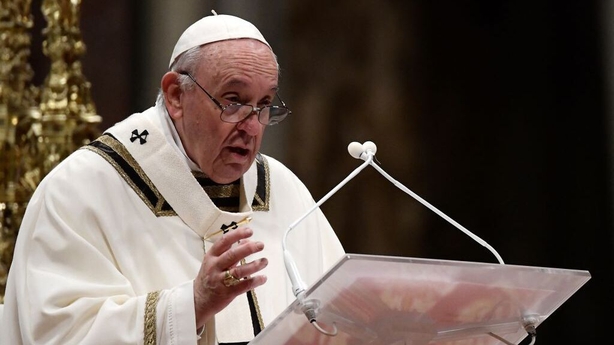 "On the day of life, let us repeat: no more deaths in the workplace. And let us commit ourselves to ensuring this."

The United Nation's International Labour Organisation (ILO) estimates that there are more than one million work-related fatalities every year.

Tomorrow, Pope Francis will deliver his twice-yearly "Urbi et Orbi" (to the city and the world) blessing and message from the central balcony of St Peter's Basilica.

The city where Christians believe Jesus was born is usually a focal point of the holiday, with thousands packing the streets and filling the hotels.

But Israel, which controls all entrances to Bethlehem in the occupied West Bank, closed its borders to foreigners in an effort to curb infections from the Omicron strain of Covid-19.

Last year, Bethlehem curtailed the celebration sharply because of the pandemic, with a virtual tree lighting and just a handful of visiting scout troops.

This year, the celebrations were more vibrant, but still just a fraction of their usual size.

An upbeat Palestinian tourism minister Rula Maayah said it is "thanks to the vaccines" that it is celebrating again.

On average, Bethlehem welcomed three million visitors a year before the pandemic, with Christmas alone drawing 10,000 people to the city's hotels, around half from abroad.

The municipality said it worked this year to appeal to local visitors from Palestinian communities across the Holy Land.

Several businesses kept their doors shut, despite Christmas Eve being the most important day of the year for Bethlehem.

Inside the Church of the Nativity, visitors were able to meditate nearly alone at the grotto where Jesus is said to have been born.