SpaceX's all-civilian Inspiration4 crew are "healthy, happy and resting comfortably," the company said today in its first update since the pioneering mission blasted off from Cape Canaveral in Florida last night.

The four American space tourists "travelled 5.5 times around Earth, completed their first round of scientific research, and enjoyed a couple of meals" before going to bed, Elon Musk's company said.

Mr Musk tweeted that he had personally spoken with the crew and "all is well."

After waking up, they will get their first look out of the Dragon ship's cupola - a large observation dome that has been fitted onto the vessel for the first time, in place of a docking mechanism.

That is deeper in space than the International Space Station, which orbits at 420km, and the furthest any astronauts have ventured from our planet since a 2009 maintenance mission for the Hubble telescope.

The mission aims to raise $200 million for St Jude's Children's Research Hospital, and study the biological effects of deep space on the astronauts' bodies.

Its main goal, however, is to prove that space is accessible to ordinary people as the United States and private companies like SpaceX seek to further commercialise the cosmos.

The space adventure bookends a summer marked by the battle of the billionaires Richard Branson and Jeff Bezos to reach the final frontier.

But these flights only offered a few minutes of weightlessness - rather than the three full days of orbit the Inspiration4 crew will experience, before splashing down off the coast of Florida on Saturday.

Earlier today, as the spacecraft climbed to nearly 200km above Earth, Mr Isaacman read a statement thanking those who made possible a journey "right to the doorstep of an exciting and unexplored frontier, where few have come before and many are about to follow."

"The door is open now, and it's pretty incredible," he said.

The flight, representing the first crewed mission to orbit with no professional astronauts, is expected to last about three days from launch to splashdown in the Atlantic, mission officials said.

It also marked the debut flight of SpaceX owner Elon Musk's new orbital tourism business, and a leap ahead of competitors likewise offering rides on rocket ships to customers willing to pay a small fortune for the exhilaration, and bragging rights, of spaceflight.

Ms Arceneaux made history as the youngest American launched into space and the youngest among just over 550 humans to reach Earth orbit, according to SpaceX.

The Inspiration4 crew has no part to play in flying the spacecraft, which is operated by ground-based flight teams and onboard guidance systems, even though two crew members are licensed pilots. 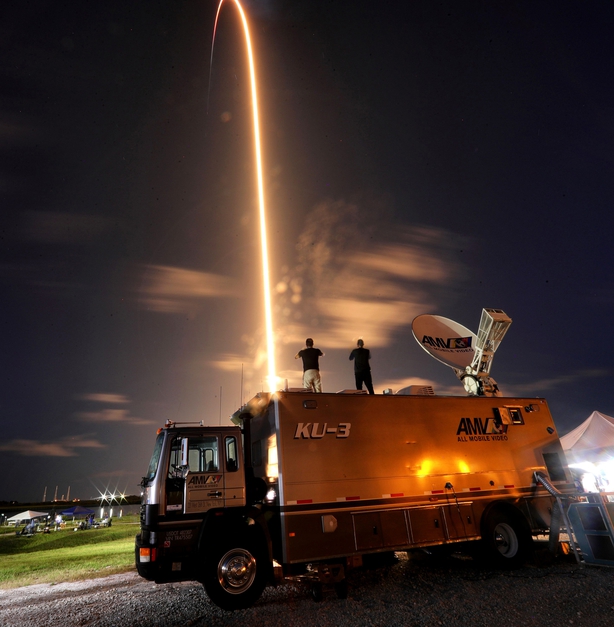 Inspiration4 officials have said the mission is more than a joyride.

While in orbit, the crew will perform a series of medical experiments with "potential applications for human health on Earth and during future spaceflights," the group said.

Biomedical data and biological samples, including ultrasound scans, will also be collected from crew members before, during and after the flight.