Afghanistan risks backsliding on nearly two decades of schooling gains for children, especially girls, as the prospect of violence looms with the return of Taliban rule, the UN's education agency has said.

"The number of internally displaced persons is projected to increase, heightening the risk of learning losses among children and generational catastrophe," the Paris-based UNESCO said in a statement.

The loss will "negatively affect the sustainable development of the country for years to come", it added.

Since 2001, when US forces ousted the first Taliban regime after the September 11 terror attacks, the number of girls in primary school jumped from "almost zero" to 2.5 million in 2018, according to the agency's latest report.

Female literacy nearly doubled to 30%, and currently four of 10 students in primary classes are girls.

Overall, some 10 million children and young people are enrolled, up from just one million in 2001.

However the new Taliban administration has already decreed that women attending private universities, which have flourished in recent years, must be separated from men.

Female students must also be covered with a long abaya robe and a niqab, a face veil with a small window to see through.

Further hard-line education rules for public institutions are expected as well, such as forbidding men to teach women - a huge problem in a country already facing a shortfall of female teachers.

"This will deal a huge blow to women's participation in higher education and to girls' education more broadly, negatively impacting their lives, work and citizenship," UNESCO said. 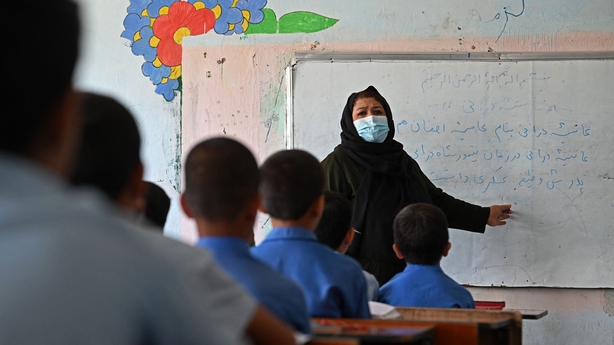 A withdrawal of international aid poses another threat, since it makes up half of Afghanistan's education expenditures.

Even with those funds, teacher salaries are routinely paid late, discouraging more people from taking up the profession.

The report added that before the Taliban's return to power, Afghanistan's education challenges were already "colossal".

"Half of primary school-aged children are not enrolled in school while 93% of children at late primary are not proficient in reading," the report found.

It urged efforts to "clear barriers" to getting girls into schools, by hiring more female teachers, especially in rural areas.

"What is at stake in Afghanistan is the absolute necessity of preserving the gains made in education, especially for girls and women," UNESCO director general Audrey Azoulay said.