The choice for the United States in Afghanistan was either to withdraw from the country or escalate the conflict, President Joe Biden said a day after the last US soldiers pulled out of the country.

"That was the choice: between leaving or escalating. I was not going to extend this forever war, and I was not extending a forever exit," Mr Biden said.

Leaving on 31 August, he said, was designed to save American lives and was not an arbitrary deadline.

Mr Biden rejected criticism of his decision to stick to a deadline to pull out of Afghanistan this week.

In a televised address from the White House State Dining Room, Mr Biden criticised the ousted Afghan government's inability to fight back against swift Taliban advances, which forced the US and its NATO allies into a hasty exit, and highlighted the role played by former US president Donald Trump.

The deal brokered by Mr Trump authorised "the release of 5,000 prisoners last year, including some of the Taliban's top war commanders, among those who just took control," Mr Biden said.

"By the time I came to office, the Taliban was in its strongest military position since 2001, controlling or contesting nearly half of the country," he said.

US officials believe 100 to 200 Americans remain in Afghanistan "with some intention to leave," Mr Biden said.

He said most of those who remained were dual citizens and long-time residents who earlier had decided to stay, adding the United States was determined to get them out.

Many politicians had called on Mr Biden to extend the 31 August deadline to allow more Americans and Afghans to escape. The US president said it was "not an arbitrary deadline," but one "designed to save lives".

"I take responsibility for the decision. Now some say we should have started mass evacuations sooner and couldn't this have been done in a more orderly manner. I respectfully disagree," said Mr Biden.

Even if evacuations had begun in June or July, he said, "there still would have been a rush to the airport" by people wanting to leave.

The departure of the last US troops from Afghanistan this week as the Taliban took over caps two decades of military involvement that Mr Biden was determined to end.

While most Americans agreed with him, that end has not come smoothly.

Mr Biden's presidency, which had been focused on fighting the coronavirus pandemic and rebuilding the economy, now faces political probes over the handling of the withdrawal as well as the logistical challenge of finding new homes for thousands of Afghans being moved to US military bases.

The US president also must contend with a surge in coronavirus infections, disasters like hurricanes and wildfires, and a series of difficult deadlines to get signature spending measures through Congress.

Republicans and some Democrats have expressed frustration and anger at the rapid fall of Afghanistan to the Taliban, the former leaders who were ousted by the United States after the 11 September 2001 attacks, and what they say has been a botched withdrawal.

Republicans are expected to use the crisis to try to derail Mr Biden's policy and legislative agenda and as a talking point in the 2022 midterm elections.

They hope to take control of the Senate and House of Representatives from Biden's Democrats, which could hobble the second half of his presidency.

Mr Biden said more troops would have had to go to Afghanistan and into harm's way if the exit had not occurred.

Less than 40% of Americans approve of Mr Biden's handling of the withdrawal, and three quarters wanted US forces to remain in the country until all American civilians could get out, according to a Reuters/Ipsos opinion poll released yesterday.

Leading House Republicans, including the top Republican on the Foreign Affairs Committee, Michael McCaul, said they wrote to Mr Biden's national security adviser, Jake Sullivan, requesting details of the plan to repatriate Americans and evacuate others left behind.

"Congress has a right to know how these evacuations will be facilitated and conducted," Mr McCaul said in a statement. 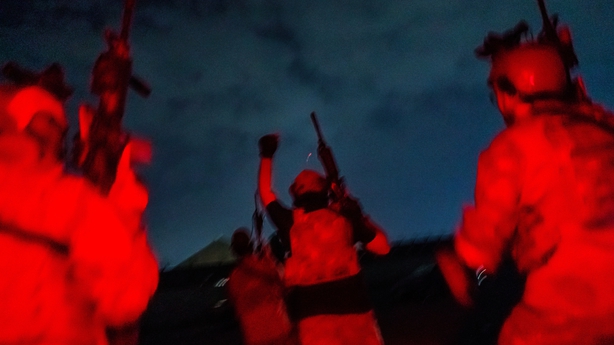 The last US flight, a large C-17 military plane, took off from Hamid Karzai International Airport one minute before midnight, Kabul time.

Speaking from the runway hours later, a Taliban spokesman, Zabihullah Mujahid, said the new regime wanted to have good relations with the United States and the rest of the world.

The US says it will hold the Taliban to its promise of safe passage for Americans and others who were left behind and who want to leave.

Taliban fighters quickly swept into the airport and fired weapons into the sky in jubilation, an astonishing return after US forces invaded in 2001 and toppled the hardline Islamists for supporting al-Qaeda.

"Congratulations to Afghanistan... this victory belongs to us all," Taliban spokesman Zabihullah Mujahid told reporters hours later from the runway of the airport.

Mr Mujahid said the Taliban's victory was a "lesson for other invaders".

However the Taliban has repeatedly promised a more tolerant and open brand of rule compared with its first stint in power, and Mr Mujahid continued that theme.

Many Afghans are terrified of a repeat of the Taliban's initial rule from 1996-2001, which was infamous for its treatment of girls and women, as well as a brutal justice system.

The early finish followed a threat from the regional offshoot of the Islamic State group, rivals of the Taliban, which was seeking to attack the US forces at the airport.

More than 123,000 people were evacuated from Kabul on board the US-led airlift operation, which began just after the Taliban swept into the capital on 14 August.

All eyes will now turn to how the Taliban handles its first few days with sole authority over the country, with a sharp focus on whether it will allow other foreigners and Afghans to leave the country.

US Secretary of State Antony Blinken said a small number of US citizens remained in the country - "under 200" but likely closer to just 100 - and wanted to leave.

Many thousands of other Afghans who had worked with the US-backed government and fear retribution also want to get out.

Western allies have voiced heartbreak in recent days that not all Afghans who wanted to flee could get on the evacuation flights.

The UN Security Council adopted a resolution yesterday, requiring the Taliban to honour a commitment to let people freely leave Afghanistan in the days ahead, and to grant access to the UN and other aid agencies.

But they did not agree to call for the creation of a "safe zone" in Kabul, as envisaged by French President Emmanuel Macron.

Talks are ongoing as to who will now run Kabul airport.

The Taliban has asked Turkey to handle logistics while it maintains control of security, but President Recep Tayyip Erdogan has not yet accepted that offer.

It was not immediately clear which airlines would agree to fly in and out of Kabul.