The UN rights chief has voiced grave concern at the situation in Afghanistan after the Taliban swept into power, saying their treatment of women would mark a "fundamental red line".

Speaking before an emergency session on Afghanistan, Michelle Bachelet urged the Taliban to honour commitments to respect the rights of women and girls, and ethnic and religious minorities, and refrain from reprisals.

"The onus is now fully on the Taliban to translate these commitments into reality," she said.

The High Commissioner for Human Rights stressed that indulging in rights violations would "undermine the legitimacy of the perpetrators, both vis-a-vis the people, and also with respect to regional and international institutions and other states."

"A fundamental red line will be the Taliban's treatment of women and girls," she said, urging "respect for their rights to liberty, freedom of movement, education, self expression and employment."

The militants have repeatedly promised a different kind of rule to their brutal regime of the 1990s that saw women confined to their homes, most entertainment banned, and stonings and public executions used as punishments. 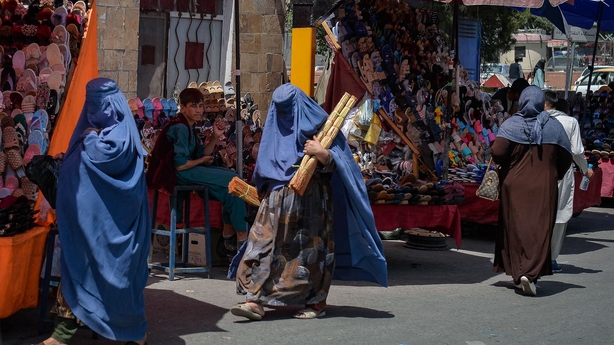 But their rebranding is being treated with scepticism, and large crowds continue to mass outside Kabul airport desperately seeking evacuation, terrified of facing life under the Taliban.

Even before the Taliban takeover, the UN says Afghanistan saw a sharp increase in civilian casualties in recent months.

Ms Bachelet said her office had received credible reports of serious violations in places that have been under Taliban control, including summary executions, restrictions of women's rights, blocking girls from attending school and recruitment of child soldiers.

Nasir Ahmad Andisha, the Afghan ambassador to the UN in Geneva appointed under the now collapsed government of ex-president Ashraf Ghani and who continues to represent his country, made clear that he wanted to see strong action.

He urged council members to deliver "a strong message to all parties including the Taliban that abuses and violations of human rights... will have consequences".

Rights groups had called for the council to establish an international fact-finding mission to assess the situation on the ground and seek to document violations, including war crimes and crimes against humanity, with the view to ensuring accountability.

But a draft resolution presented yesterday to the council only recommended that Ms Bachelet present a report on the rights situation in Afghanistan during the main annual council session next March, drawing condemnation.

A number of countries who otherwise would have pushed for the resolution to go further had held back for fear that a stronger response could anger the Taliban and jeopardise access for evacuations from the country, according to several diplomatic sources.

The United Nations has warned that low supplies of food aid were threatening to plunge war-ravaged Afghanistan into a humanitarian disaster once winter arrives.

Since the Taliban swept into power in Afghanistan 10 days ago, the UN's World Food Programme said it had managed to bring 600 metric tonnes of food and 16 new trucks into the country to scale up preparations to assist families through the harsh winter.

However the WFP's deputy regional director, Anthea Webb, told reporters in Geneva that the agency was running out of time to get aid to where it needs to go.

Usually at this time of year, WFP would be prepositioning food stocks across the country and distributing it to needy families before they are cut off by heavy snow.

But faced with tight funding levels and soaring needs, it said this year is it facing the threat of running out of wheat flour - its core supply - from October.

"We have only a few short weeks to secure the necessary donor funding and get food in place before mountain passes are blocked by snow," Ms Webb said.

Once the snow sets in, it will be too late to help, she warned.

Any further delay in WFP's preparations could be deadly, Ms Webb cautioned, saying the agency needed $200 million immediately to deliver lifesaving assistance "before it's too late".

"A humanitarian catastrophe awaits the people of Afghanistan this winter unless the global community makes their lives a priority."

WFP has warned that one-third of Afghanistan's population - 14 million people - is already at risk of severe or acute hunger.