Thousands of civilians desperate to flee Afghanistan thronged Kabul airport after the Taliban seized the capital.

The chaos prompted the US military to temporarily suspend evacuations as the Biden administration came under mounting criticism at home over its pullout.

He said a C-17 transport aircraft had landed with US Marines aboard, and a second one loaded with an army unit was to land soon, to help establish security for the airport.

At a press conference this evening US President Joe Biden said the mission of the United States in Afghanistan was never supposed to be nation-building as he defended his decision to pull out US troops from the country.

Earlier today, crowds converged on the airport seeking to escape, including some clinging to a US military transport plane as it taxied on the runway, according to footage posted on social media.

US troops had fired in the air to deter people trying to force their way on to a military flight evacuating US diplomats and embassy staff, a US official said.

Five people were reported killed in chaos at the airport, although a witness said it was unclear if they had been shot or killed in a stampede.

A US official said two gunmen had been killed by US forces there over the past 24 hours, while one US soldier was injured.

"In the thousands of people who were there peacefully, two guys who had weapons brandished them menacingly. They were both killed," the official said, insisting on anonymity.

A top Pentagon general met the Taliban in Doha to urge them not to attack as thousands sought to flee the country, a US defence official said.

The official said that the head of the US Central Command, General Kenneth McKenzie, told Taliban officials in a face-to-face meeting yesterday in Doha not to attack the airport.

Thousands of American troops took control of security at the airport on Saturday to enable the evacuations of US officials.

There are chaotic scenes at Kabul airport as crowds of people have flocked there in the hope of catching a flight out of Afghanistan after the Taliban takeover of the country | Read more: https://t.co/vHOxaN6CkH pic.twitter.com/5NRTBZQmbA

Taliban officials have declared the 20-year war over and issued statements aimed at calming the panic that has been building in Kabul as the militants, who ruled from 1996 to 2001, routed the US-backed Afghan army as foreign forces withdrew.

Suhail Shaheen, a spokesperson for the Taliban, said in a message on Twitter that its fighters were under strict orders not to harm anyone.

"Life, property and honour of no one shall be harmed but must be protected by the mujahideen," he said.

Earlier, Mohammad Naeem, spokesman for the Taliban's political office, told Al Jazeera TV that the Afghan people and the Taliban had just witnessed the fruits of their efforts and sacrifices over 20 years.

The rapid conquest of Kabul follows US President Joe Biden's decision to withdraw US forces after two decades of war that cost billions of dollars.

Mr Biden, who said Afghan forces had to fight back against the Islamist Taliban, is due to speak later this evening.

Congested traffic came to a standstill in Kabul as people sought to flee from the Afghan capital after the Taliban entered the city, capping a lightning offensive across the country | Read more: https://t.co/vHOxaN6CkH pic.twitter.com/JolNWVhJOn

It took the Taliban just over a week to seize control of the whole country after a lightning sweep that ended in Kabul as government forces, trained for years and equipped by the US and others at a cost of billions of dollars, melted away.

US officers have long worried that corruption would undermine the resolve of badly paid, ill-fed and erratically supplied frontline soldiers.

Al Jazeera broadcast footage of what it said were Taliban commanders in the presidential palace with dozens of fighters.

Mr Naeem said the form of the new regime in Afghanistan would be made clear soon, adding the Taliban did not want to live in isolation and calling for peaceful international relations.

The militants sought to project a more moderate face, promising to respect women's rights and protect both foreigners and Afghans.

However, many Afghans fear the Taliban will return to past harsh practices with their imposition of sharia religious law.

During their 1996-2001 rule, women could not work and punishments such as public stoning, whipping and hanging were administered.

"Everyone is worried," a former government employee now in hiding in Kabul said.

"They're not targeting people yet but they will, that's the reality. Maybe in two or three weeks, that's why people are fighting to get out now."

Both the UN and the US said last week they had received reports that Taliban fighters were executing surrendering government soldiers.

Taliban officials said they had received no reports of any clashes anywhere in the country: "The situation is peaceful," one said.

"I'm in a complete state of shock," said Sherzad Karim Stanekzai, who spent the night guarding his carpet shop. 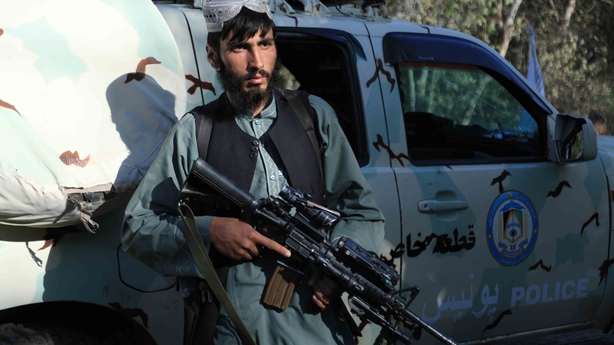 People thronged to Kabul airport from late yesterday, wandering around the runways in the dark, pulling luggage and jostling for a place on one of the last commercial flights to leave before US forces took over air traffic control.

US forces gave up their big military base at Bagram, 60km north of Kabul, several weeks ago, leaving Kabul's airport their only way out, to the anger of many Afghans.

There was the prospect of chaos in the skies over Afghanistan too.

Yesterday, the Pentagon authorised another 1,000 troops to help evacuate US citizens and Afghans who worked for them, expanding its security presence on the ground to almost 6,000 troops within the next 48 hours.

A US State Department spokesperson said all embassy personnel, including Ambassador Ross Wilson, had been transferred to Kabul airport, mostly by helicopter, to await evacuation, and the American flag had been lowered and removed from the embassy compound.

Western nations, including Ireland, France, Germany and New Zealand, said they were working to take out citizens, as well as some Afghan employees.

Minister for Foreign Affairs Simon Coveney told RTÉ's Morning Ireland that there are 23 Irish citizens in Afghanistan, 15 of whom are seeking to leave the country. 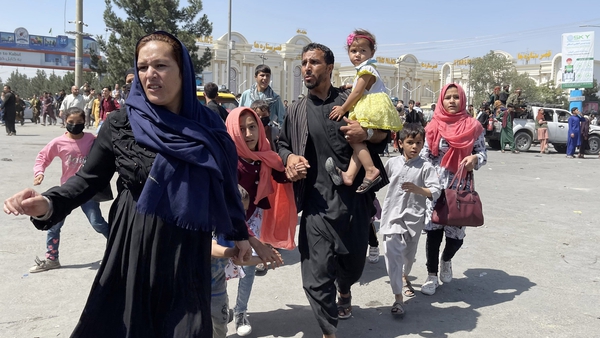 We cannot and must not abandon the people of Afghanistan, says Guterres