The "significant upsurge in violence" in the West Bank, in and near Gaza and in east Jerusalem "needs to stop immediately," a spokesman for EU foreign policy chief Josep Borrell has said.

"The firing of rockets from Gaza against civilian populations in Israel is totally unacceptable and feeds escalatory dynamics," the spokesman added in a statement.

The call came as Israel carried out air strikes on Gaza following Palestinian militants' rocket fire which Israel said caused no casualties on its side.

Earlier, at least 20 people, including nine children, were killed and 65 wounded in Israeli air strikes on Gaza after Palestinian militants fired rockets towards Israel, Hamas said.

Israel said it was striking Hamas targets in retaliation for dozens of rockets fired from Gaza towards Israel, but has not confirmed its strikes had caused fatalities.

The health ministry in Hamas-run Gaza said the updated death toll included a 10-year-old girl, while Hamas has confirmed that one of its commanders was killed in a strike.

Israeli Prime Minister Benjamin Netanyahu warned that Hamas had crossed a "red line" by directing missiles towards Jerusalem and that the country would "respond with force".

"We will not tolerate attacks on our territory, our capital, our citizens and our soldiers. Those who attack us will pay a heavy price."

The Israeli army said at least 45 rockets were fired from the coastal strip into Israel.

Several were intercepted by Israel's Iron Dome anti missile defence system or fell onto vacant lands and no casualties were reported.

Israeli army spokesman Jonathan Conricus said: "We have started, and I repeat started, to attack military targets in Gaza".

He said Israeli forces had targeted "a Hamas military operative," while Hamas sources in the enclave confirmed that one of their commanders, Mohammed Fayyad, had been killed.

Tensions in Jerusalem have flared since Israeli riot police clashed with Palestinian worshippers on the last Friday of the Muslim holy fasting month of Ramadan in the city's worst disturbances since 2017.

Nightly unrest since then at the Al-Aqsa compound has left hundreds of Palestinians wounded, drawn calls for de-escalation from the international community and sharp rebukes from across the Muslim world.

Adding to the sense of chaos, a huge fire engulfed trees in the compound that houses the mosque, Islam's third holiest site, and the Golden Dome on the Temple Mount sacred to Jews.

Earlier today, Hamas, which controls the Gaza Strip, warned Israel to withdraw all its forces from the mosque compound and the east Jerusalem district of Sheikh Jarrah, where looming evictions of Palestinian families have fuelled angry protests.

Sirens sounded across Jerusalem just after the 3pm (4pm Irish time) deadline set by Hamas as people in Jerusalem, including lawmakers in the Knesset legislature, evacuated into bunkers, amid warnings over loudspeakers.

A spokesman for Hamas' armed wing the Qassam Brigades said that "a volley of rockets was fired towards the enemy in occupied Jerusalem in response to its crimes and aggression on the holy city and repression of its residents in Sheikh Jarrah and the Al-Aqsa mosque".

"This is a message that the enemy must understand well: if you respond we will respond, and if you escalate we will escalate."

The United States said it "condemns in the strongest terms the barrage of rocket attacks fired into Israel in recent hours. This is an unacceptable escalation."

A house in Beit Nekofa, about 10km west of central Jerusalem, was also damaged by rocket fire, AFP TV reported.

The Israeli army said on Twitter that, separate to the rockets, "as a result of an anti-tank missile fired from Gaza, an Israeli civilian in a nearby vehicle was lightly injured" in the Gaza border area.

Fears of further chaos in the Old City had temporarily eased when Israeli organisers of a march to celebrate the Jewish state's 1967 capture of east Jerusalem cancelled the event.

But then came the Hamas warning, followed by the rockets, which also forced the evacuation of the Wailing Wall and other sites.

Militants in Gaza have recently also deployed incendiary balloons that have sparked dozens of fires in Israeli territory.

In today's Al-Aqsa clashes, as during the previous nights since Friday, Palestinians hurled rocks at Israeli officers in riot gear who fired rubber bullets, stun grenades and tear gas.

Loud booms and screams echoed from the ancient stone walls of the compound, where Palestinians built makeshift barricades and the ground was littered with rocks, stun grenade fragments and other debris.

The Palestinian Red Crescent put the toll from today's clashes at 331 injured, including more than 200 who were hospitalised, five of them in critical condition.

The Israeli police reported nine injuries in their ranks. 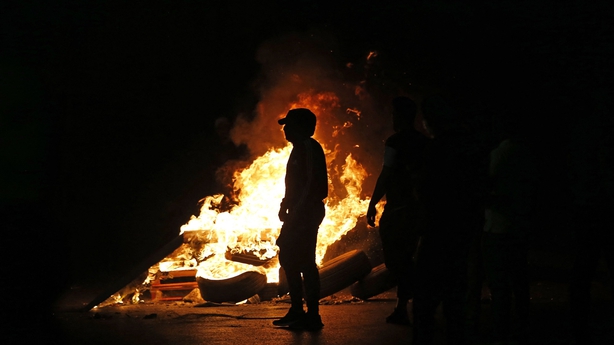 The violence since Friday has been fuelled by a long-running bid by Jewish settlers to evict several Palestinian families from their nearby Sheikh Jarrah neighbourhood.

A Supreme Court hearing on a Palestinian appeal in the case originally set for today was pushed back by the justice ministry due to the tensions.

The United Nations Security Council held an urgent meeting today on the unrest in Jerusalem but issued no immediate statement, with diplomats saying the United States believed public comments would be counterproductive.

Negotiations were continuing among the 15 nations on the council on a text that could be watered down from an initial draft proposed by Norway, diplomats added.

The US, according to one diplomat, said in the closed-door video conference that it was "working behind the scenes" to calm the situation and that it was "not sure that a statement at this point would help."

Earlier, US National Security Advisor Jake Sullivan telephoned his Israeli counterpart and voiced "serious concerns" about potential Israeli evictions of Palestinians in the holy city that have helped fuel tensions.

Minister for Foreign Affairs Simon Coveney has described as "shocking" what he called the "aggressive" response by the Israeli security forces to Palestinian protests in East Jerusalem.

Speaking in Brussels Mr Coveney said: "Images of security forces taking a very aggressive approach inside a mosque in a holy site in East Jerusalem really is, I think, quite shocking and I think it has triggered a response right around the world for many countries who are deeply uncomfortable with what they're seeing."

Mr Coveney said Ireland had co-sponsored a debate on the issue in the UN Security Council, and he had raised it during today’s meeting of EU foreign ministers in Brussels.

He told RTÉ News: "What needs to be the answer is the international community working with the Israeli government and the Palestinian Authority to try to make sure that the kind of scenes we've seen, and the hundreds of people who've been injured as a result of aggressive security responses to legitimate protest - I think that has to stop.

"But we have to stop it through diplomacy and politics, not through violence."

"That must be absolutely condemned and it's not the answer in response," he said.