The fresh violence, a day after more than 200 people were wounded at the mosque, prompted international calls for an end to the violence.

Police said they dispersed the rally in the Sheikh Jarrah neighbourhood where demonstrators had thrown stones at security forces.

Officials said Sunday a rocket had been fired from the Gaza Strip, with the Israel Defense Forces responding by striking a "military target" in the south.

Earlier, officers had fired tear gas towards protesters on the border.

In Jerusalem, police said they made three arrests for attacks on officers, while Palestinians reported 13 other arrests earlier in the day.

The Palestinian Red Crescent reported 90 people were wounded in Saturday's clashes in Jerusalem, revising up their earlier estimate of 53.

AFP journalists in Jerusalem said Israeli riot police had fired rubber bullets, sound grenades and water cannon on Palestinians, some of whom threw projectiles at the police.

"Israel is acting responsibly to ensure respect for law and order in Jerusalem while allowing freedom of worship," he said in a meeting of security officials.

The violence was the worst in years at Al-Aqsa, Islam's third-holiest site after Mecca and Medina, located on the site Jews revere as the Temple Mount.

Palestinians have held nightly protests in Sheikh Jarrah against an attempt by Israeli settlers to take over Arab homes.

Dozens of Arab Israeli protesters also gathered across Israel in solidarity with Sheikh Jarrah residents, holding up signs that read "the occupation is terrorism".

A reporter for Israeli public TV tweeted footage of a Jewish driver whose car was attacked with stones and windows shattered at the entrance to Sheikh Jarrah Saturday.

Police blocked buses filled with Arabs headed for Jerusalem from northern Israel, saying they would not be allowed "to participate in violent riots".

Instead, hundreds marched on highways leading to the city.

Thousands of worshippers stayed on at Al-Aqsa on Saturday for Laylat al-Qadr (Night of Destiny), a peak of the Muslim holy month of Ramadan.

The Islamist movement Hamas, which rules Gaza, urged Palestinians to remain at Al-Aqsa until Ramadan ends, warning that "the resistance is ready to defend Al-Aqsa at any cost".

Outside the Damascus Gate entrance to Jerusalem's Old City, Palestinians set fire to a barricade before police on horseback dispersed the protesters. 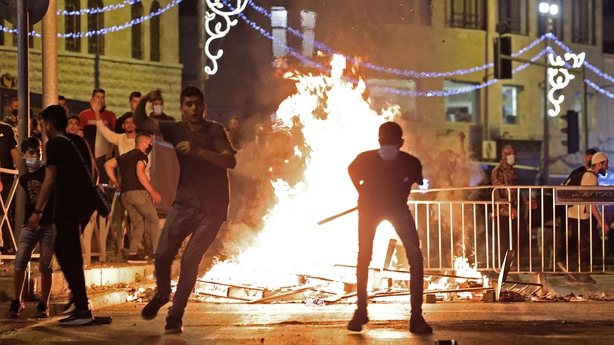 The quartet of envoys from the European Union, Russia, the United States and the United Nations expressed "deep concern" over the violence.

"We call upon Israeli authorities to exercise restraint," they wrote.

The United States - an Israeli ally whose tone has toughened under US President Joe Biden - said it was "extremely concerned" and urged both sides to "avoid steps that exacerbate tensions or take us farther away from peace".

The European Union called on the authorities "to act urgently to de-escalate the current tensions," saying "violence and incitement are unacceptable and the perpetrators on all sides must be held accountable".

Russia voiced "deep concern", calling the expropriation of land and property in the occupied Palestinian territories including east Jerusalem "a violation of international law".

Palestinian president Mahmud Abbas said he held the Israeli government responsible for the unrest and voiced "full support for our heroes in Al-Aqsa".

"The state of Israel will not let violence run loose and definitely will not allow terror groups to threaten it," he tweeted. 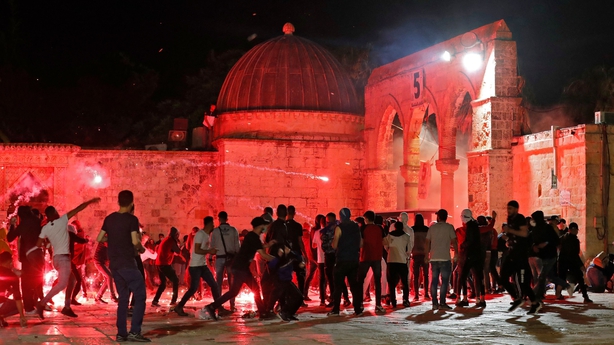 The Al-Aqsa clashes drew sharp rebukes across the Arab and Muslim world.

Turkey's President Recep Tayyip Erdogan denounced Israel as a "cruel terrorist state" in a speech in Ankara Saturday, calling on the United Nations to intervene to "stop the persecution".

Jordan condemned Israel's "barbaric attack" and Egypt, Turkey, Tunisia, Pakistan and Qatar were among Muslim countries that blasted Israeli forces for the confrontation.

Iran called on the United Nations to condemn the Israeli police actions, arguing that "this war crime once again proved to the world the criminal nature of the illegitimate Zionist regime".

Tensions are expected to remain high in Jerusalem.

Israel's supreme court is to hold a new hearing in the Sheikh Jarrah case on Monday, when Israelis mark Jerusalem Day to celebrate the "liberation" of the city.