New Zealand Prime Minister Jacinda Ardern has paid an emotional tribute to victims of the White Island volcano eruption on the first anniversary of the disaster that claimed 22 lives.

Almost 50 people, mostly Australian tourists, were on the island, also known as Whakaari, in December last year when a column of burning ash and steam blasted from a volcanic vent.

Ms Ardern said the disaster was "devastating" for all New Zealanders, as well as families of victims in Australia, Britain, Germany, the United States, China and Malaysia.

The New Zealand leader attended a memorial ceremony at the meeting house of the local Maori tribe, Ngati Awa.

Barefoot and wearing a black dress, Ms Ardern's voice shook as she said her thoughts were with families around the world remembering loved ones who were lost in New Zealand.

"I say to those who have lost and grieve, you are forever linked to this place and our nation," she told the service.

"We will continue to hold you close." 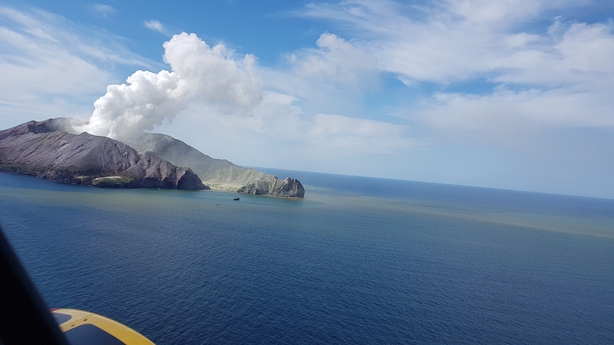 Australian Foreign Minister Marise Payne acknowledged the 17 of her compatriots who died and 11 who suffered serious injuries.

She also expressed pride at the way Australians and New Zealanders worked together to help those affected by the tragedy.

"It is a day our two countries will never forget," Ms Payne said in a statement.

New Zealand's workplace safety watchdog announced last week it was pressing criminal charges against 10 organisations and three individuals responsible for tourists being on the volcano when it erupted.

They include government agencies and tour groups, including a charter company operated by Ngati Awa that had ferried most of the visitors to the island on the day of the disaster.

The prosecution does not carry the threat of jail time, with hefty fines being the maximum penalty for anyone found guilty of breaching their duty of care.