Hong Kong politicians are set to resume a debate today over a controversial bill that would make disrespecting China's national anthem a criminal offence, as the city ramps up for fresh protests amid simmering anti-government tensions.

An annual vigil to mark the 4 June 1989, anniversary of Chinese troops opening fire on pro-democracy students in and around Tiananmen Square has been cancelled for the first time ever due to the coronavirus but activists still plan to rally.

The ban comes on the heels of China's plan to directly impose national security laws on Hong Kong, a move that has drawn international condemnation and revived anti-government demonstrations in the former British colony.

Ms Lam, along with officials from the justice and security departments, is in Beijing today to discuss the new legislation. 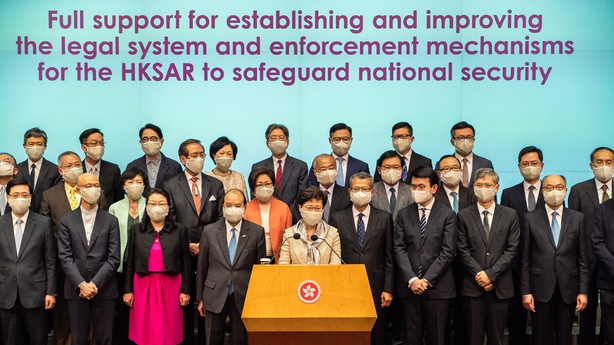 The UK will not walk away from the people of Hong Kong if China imposes a national security law which conflicts with Beijing's international obligations under a 1984 accord, British Prime Minister Boris Johnson has said.

"Hong Kong succeeds because its people are free," Mr Johnson wrote in The Times.

"If China proceeds, this would be in direct conflict with its obligations under the joint declaration, a legally binding treaty registered with the United Nations." 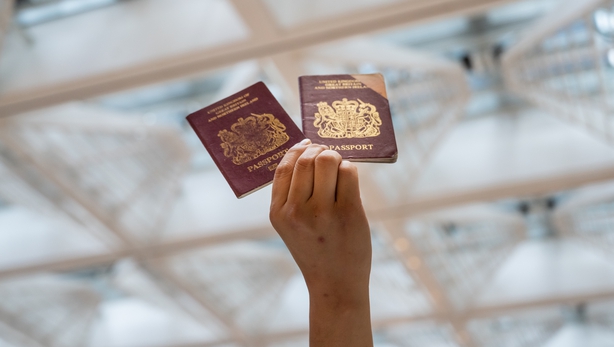 China's parliament last week approved a decision to create laws for Hong Kong to curb sedition, secession, terrorism and foreign interference. Mainland security and intelligence agents may be stationed in the city for the first time.

"Many people in Hong Kong fear that their way of life - which China pledged to uphold - is under threat," Mr Johnson said.

"If China proceeds to justify their fears, then Britain could not in good conscience shrug our shoulders and walk away; instead we will honour our obligations and provide an alternative," he said.

Mr Johnson repeated Britain's pledge to give British National Overseas passport-holders in Hong Kong a path to British citizenship - allowing them to settle in the UK.

There are about 350,000 holders of BNO passports in Hong Kong and another 2.5 million are eligible for them, Mr Johnson said.

Britain yesterday warned Beijing to step back from the brink over the national security law in Hong Kong, saying it risked destroying one of the jewels of Asia's economy while ruining the reputation of China.

"We advise the UK to step back from the brink, abandon their Cold War mentality and colonial mindset, and recognise and respect the fact that Hong Kong has returned" to China, Chinese foreign ministry spokesman Zhao Lijian said at a regular briefing.

Zhao said London must "immediately stop interfering in Hong Kong's affairs and China's internal affairs, or this will definitely backfire."

Britain's foreign minister said he has spoken to "Five Eyes" allies about potentially opening their doors to Hong Kongers if Beijing's plans to impose the national security law on the city sparks an exodus.

Semi-autonomous Hong Kong has been rocked by months of huge and often violent pro-democracy protests over the past year.

China says the law - which will bypass Hong Kong's legislature - is needed to tackle "terrorism" and "separatism" in a restless city it now regards as a direct national security threat.

But opponents, including many western nations, fear it will bring mainland-style political oppression to a business hub that was supposedly guaranteed freedoms and autonomy for 50 years after its 1997 handover to China from the UK.

In parliament yesterday, Britain's Foreign Secretary Dominic Raab said he had reached out to Australia, New Zealand, the United States and Canada about contingency plans if the law creates a deluge of Hong Kongers looking to leave.

"I raised it on the Five Eyes call yesterday - the possibility of burden sharing if we see a mass exodus from Hong Kong," Mr Raab told MPs, referencing the intelligence-sharing alliance between the five powers.

Britain has said it will offer millions of Hong Kongers visas and a possible route to UK citizenship if China persists with its national security law, a commitment Mr Johnson detailed in the column for The Times and the South China Morning Post newspapers today.

Mr Johnson said Britain could allow BNO holders to come for a renewable period of 12 months "and be given further immigration rights, including the right to work, which could place them on a route to citizenship".

Beijing has hit out at foreign criticism of its national security law, saying the issue is a purely internal affair, and has vowed to implement "counter measures".

It says Hong Kongers will continue to keep their political freedoms - although anti-subversion laws are routinely used to quash political dissent on the mainland.

Britain says it views the proposed law as a breach of the 1984 agreement with Beijing ahead of the handover guaranteeing Hong Kong's freedoms and a level of autonomy - a deal that formed the bedrock of its rise as a world class finance centre.

"Britain does not seek to prevent China's rise," Mr Johnson wrote. "It is precisely because we welcome China as a leading member of the world community that we expect it to abide by international agreements."

His comments came as political tensions are rising in Hong Kong once more.

Yesterday politicians in the city's pro-Beijing weighted legislature restarted debate on a law that would criminalise insults to China's national anthem.

The bill is likely to be passed tomorrow - a day when Hong Kongers will also mark the anniversary of Beijing's 1989 Tiananmen crackdown, despite city authorities banning the traditional annual vigil because of the coronavirus.

Following that, demonstrations are planned to mark the anniversary of the million-people march on 9 June last year against a since-withdrawn mainland China extradition bill, and the protests three days later that were met by police with teargas and rubber bullets in scenes which radicalised moderates.

The two key events turned last year's protests into a broader movement for greater democracy, plunging the Chinese-ruled city into its biggest crisis since its handover from former colonial master Britain in 1997.

Frustrated with the often-violent demonstrations, authorities in Beijing last month advanced plans to introduce national security laws in the city, sending shivers through the legal, diplomatic and business communities.

Even before China announced its plan for the security law, there was a surge in renewals of British National Overseas Passports by Hong Kong residents, while immigration consultants have reported a rush of inquiries from people looking to move overseas.