Here is a timeline of the rise, fall and acquittal of Cardinal George Pell:

Priesthood
Born in 1941, Pell grew up in rural Australia and, inspired by his devout Catholic mother, chose a life in the church.

He was ordained into the priesthood in 1966 and became parish priest in his home town of Ballarat in 1972.

He was named Archbishop of Sydney in 2001 and was appointed a cardinal by Pope John Paul II in 2003, taking part in the election of Pope Benedict XVI in 2005 and of Pope Francis in 2013.

Investigations begin
March 2013: Police set up a secret taskforce to investigate allegations of child sex abuse concerning Pell. The probe is only revealed during court hearings in 2018.

March and August 2013: Pell gives evidence on two occasions to an Australian Royal Commission into institutional responses to child sex abuse allegations against the Catholic Church.

December 2015: Police appeal for information on alleged child sex abuse in Melbourne between 1996-2001, the period when Pell served as Archbishop.

Pell in court
July 2017: Pell makes first court appearance and judge issues a gag order on reporting of the case except that there are "multiple complainants" and "multiple charges" for "historical sexual offences".

May 1, 2018: Pell ordered to stand in two trials involving separate allegations and locations. The court suppression order is expanded to reporting of all court proceedings of the first trial in Australia to protect against jury bias in the second trial.

September 20, 2018: Jury discharged without verdict in the first trial. A retrial is ordered. 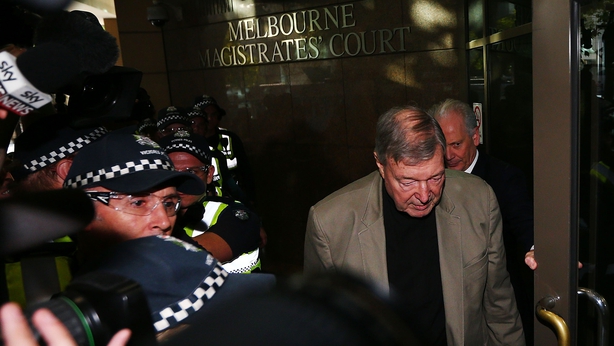 December 12, 2018: Pell is removed from the Vatican's so-called C9 Council of Cardinals, an international advisory body set up by Pope Francis.

February 26, 2019: Prosecutors drop plans for a second trial for alleged sexual offences at a Ballarat swimming pool in the 1970s, allowing the reporting of the first trial and verdict.

February 27, 2019: The Vatican drops Pell as its finance chief and says it will launch an internal probe into the child sex abuse charges, though later says this will not begin until after all legal avenues are exhausted.

March 13, 2019: Pell is sentenced to six years in prison for sexually abusing the two choirboys in 1996-1997. Pell appeals the conviction.

August 21, 2019: Pell's appeal is dismissed in a 2-1 decision, with one judge strongly dissenting.

April 7, 2020: Seven-member panel of High Court unanimously quashes Pell's convictions and the cleric leaves his prison in rural Victoria after just over a year behind bars.