The High Court ordered his convictions be quashed and verdicts of acquittal be entered in their place, ending the most high-profile case of alleged historical sex abuse to rock the Catholic Church.

He was acquitted on all five counts of sexually abusing two 13-year-old choirboys in the 1990s, when the court overturned earlier decisions of a jury and lower appeals court.

The former Vatican treasurer had steadfastly maintained his innocence throughout a high-profile and lengthy court process.

A jury had convicted Cardinal Pell of the offences in December 2018 before that decision was upheld by a three-judge panel in Victoria state's Court of Appeal last August, in a split 2-1 verdict.

Once the Vatican's third-ranking official, Cardinal Pell was jailed this year.

But Australia's High Court found there was "a significant possibility that an innocent person has been convicted because the evidence did not establish guilt to the requisite standard of proof".

The seven justices unanimously found the lower court had "failed to engage with the question of whether there remained a reasonable possibility that the offending had not taken place, such that there ought to have been a reasonable doubt as to the applicant's guilt".

Cardinal Pell said his acquittal remedied "a serious injustice", but that he held "no ill will" towards his accuser.

He added that his trial "was not a referendum on the Catholic Church; nor a referendum on how church authorities in Australia dealt with the crime of paedophilia in the church".

The prosecution's case had relied almost entirely on the testimony of Cardinal Pell's surviving accuser, who testified in a closed-door hearing that he had sexually assaulted them in a Melbourne cathedral while he was archbishop of the city.

The second choirboy, who is not known to have ever spoken of the abuse, died of a drug overdose in 2014.

Neither man can be identified for legal reasons.

Cardinal Pell's lawyers had argued there were "compounding improbabilities" in the case, including that Cardinal Pell would not have had the time or opportunity to molest the boys in the priests' sacristy after mass.

The High Court found that though the jury had "assessed the complainant's evidence as thoroughly credible and reliable", evidence from other witnesses required the jury "acting rationally" to have "entertained a reasonable doubt as to the applicant's guilt".

He remains in the priesthood, but his future role in the Catholic Church remains unclear.

During the course of his trial, he was quietly removed from top church bodies but the Vatican resisted launching an internal investigation. 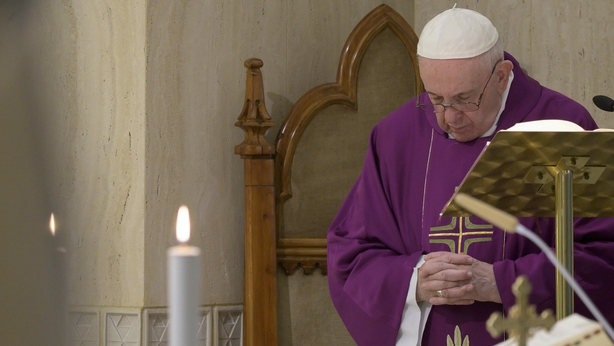 Pope Francis has offered his morning mass for those who suffer today from unjust sentences.

Each morning at the Mass in his residence, Francis chooses an intention for the service, such as remembering the poor, the homeless or the sick.

"I would like to pray today for all those people who suffer unjust sentences resulting from intransigence (against them)," Francis said, speaking before the start of the Mass.

Francis did not mention Cardinal Pell by name.

In recent weeks, the pope's intentions for nearly all of his daily masses have been related to the coronavirus pandemic.

Francis compared the suffering of those inflicted with unjust sentences today to the way Jewish community elders persecuted Jesus with "obstinacy and rage even though he was innocent".