Italy has reported 49 more deaths from Covid-19, bringing the total number of fatalities there over the past two weeks to 197.

It is the highest single-day toll  in Italy to date, surpassing the 41 new deaths reported yesterday.

The total is the second-highest in the world after China.

Italy also saw its number of Covid-19 infections grow by 778 to 4,636, the fourth highest in the world after China, South Korea and Iran.

Meanwhile, Slovakia has reported its first case of coronavirus. A man whose son visited Venice in Italy tested positive.

Slovakian authorities have imposed an indefinite ban on flights to and from Italy, starting on Monday.

"Today, a 52-year-old patient was confirmed to be infected," Prime Minister Peter Pellegrini said, who has been hospitalised in Bratislava.

"The patient did not travel anywhere recently but his son returned from Venice a couple of weeks ago," Mr Pellegrini added.

"His son has not shown any signs of illness."

Slovakia had been the only central European country without a confirmed case of Covid-19.

The Republic of Ireland soccer team is due to play Slovakia in a Euro 2020 play-off match in Bratislava later this month.

Coronavirus has infected more than 100,000 people in 91 countries and territories globally, killing 3,407.

Earlier, the Vatican reported its first coronavirus case, saying it had suspended outpatient services at its health clinic after a patient tested positive. 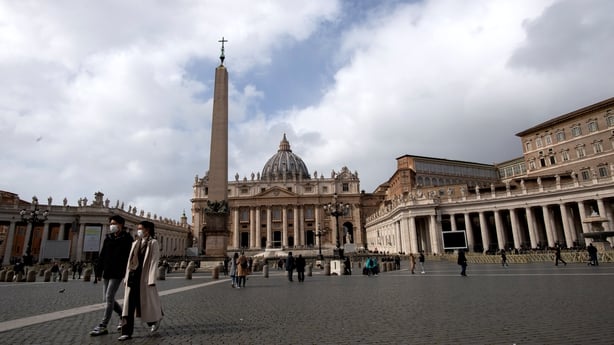 The clinic inside the city state, which has around 1,000 residents, will be deep cleaned, while the emergency room will remain open, spokesman Matteo Bruni said.

It is used by priests, residents and employees, including those now retired, as well as their relatives.

Mr Bruni said the Vatican was getting in touch with all those who had passed through the clinic, as per protocol.

He gave no details on whether the person who tested positive was such an employee or among the relatively few clergy or guards who live inside its walls.

The Vatican has said Pope Francis, who cancelled a Lent retreat for the first time in his papacy, is suffering only from a cold that is "without symptoms related to other pathologies".

A man in his 80s has become the second person in the UK to die after testing positive for coronavirus.

More than 160 people have now tested positive for coronavirus in the UK, in the largest day-on-day increase.

In total, 163 people had tested positive for Covid-19 as of 9am this morning, up from 115 cases reported at the same time on Thursday.

Yesterday evening, an older patient, reported to be a woman in her 70s, became the first person in the UK to die after being diagnosed with Covid-19.

China's central province of Hubei, excluding the provincial capital Wuhan, has reported zero new cases of coronavirus over 24 hours for the first time during the outbreak, as authorities continued to contain imported infections in other parts of the country.

Wuhan, the centre of the epidemic, reported 126 new confirmed cases yesterday but there were no new infections in the province apart from those, the National Health Commission said this morning.

Elsewhere in China, schools in provinces reporting no new cases for a number of days, started to set their opening dates in a sign of the country returning to normal.

Outside of Hubei, there were 17 new confirmed cases, bringing the total new infections in mainland China to 143 yesterday, up from 139 cases a day earlier.

The overall accumulated number of confirmed cases in mainland China stood at 80,552, with the death toll at  3,042.

All three were students studying abroad in Iran, it added

Ireland has confirmed 13 cases of Covid-19, including one patient who had not travelled to an affected area.

A fourth case has been confirmed in Northern Ireland.

Japan is cancelling an annual ceremony marking the anniversary of a deadly tsunami and nuclear disaster as the country steps up efforts to curb the new coronavirus, officials said.

For the past eight years, the prime minister, politicians, and family members who lost loved ones in the disaster have attended the nationally televised ceremony.

The move comes a day after Japan and China confirmed a state visit by Chinese President Xi Jinping has been postponed, and Japan said the country will quarantine people coming from China and South Korea for two weeks on arrival.

More than 18,500 people were killed or left missing after the massive tsunami triggered by a 9.0-magnitude underwater quake on 11 March 2011.

The isolated Himalayan kingdom of Bhutan has reported its first case of the coronavirus after a US tourist tested positive, the prime minister said.

The tiny, land-locked country, famous for measuring Gross National Happiness has emerged as a popular tourist destination in recent years.

But the government immediately shut borders to foreign visitors for two weeks in an effort to limit the impact of a disease that has wreaked havoc in more developed countries around the world.

The 76-year-old man arrived in Bhutan from India on 2 March, and was admitted to hospital on 5 March with a fever, where he tested positive for COVID-19, the office of Prime Minister Lotay Tshering said in a Facebook post.

The post added that there would be "two weeks' restriction on all incoming tourists with immediate effect".

Japan joined the list of almost 100 countries that have imposed restrictions on South Korean travellers, barring arrivals from highly affected areas starting tomorrow and ordering a two-week quarantine for those from other regions.

The South Korean foreign ministry said Japan's ambassador would be summoned to explain Tokyo's decision and receive a formal complaint.

Seoul has previously summoned ambassadors from Vietnam and Singapore over similar travel restrictions.

The row came as the number of new cases in South Korea, the country with the biggest outbreak of the flu-like virus outside China, fell to 196 from 760 the previous day, for a total of 6,284 infections.

The death toll rose by seven to 42, the Korea Centers for Disease Control and Prevention (KCDC) said.

The US Forces Korea reported a new case for a total of seven among soldiers, employees or people related to the roughly 28,500 US troops stationed in South Korea.