France has declared its first three confirmed cases of the Wuhan coronavirus, with two patients being hospitalised in Paris and the other in the southwestern city of Bordeaux.

French Health Minister Agnes Buzyn said during a press conference these were the first cases in Europe, adding it was likely other cases would arise in the country.

Australia has also confirmed its first case of the virus.

China has declared another 15 deaths from the virus, bringing the total fatalaties to 41 - all from the Hubei province.

The authorities have suspended all travel in ten cities in an attempt to stop the spread of the virus.

Meanwhile, the BBC has reported that tests for the virus on a patient at Victoria Hospital in Belfast have come back negative.

It is understood the patient arrived at the Royal Victoria last weekend with what appeared to be symptons, but the coronavirus has now been ruled out.

Elsewhere, a further 14 people tested for coronavirus in the UK have been given the all-clear, but checks are ongoing on other people, the Chief Medical Officer for England has said.

All the people tested in the UK had visited Wuhan, the Chinese city where the outbreak originated.

Four out five patients tested in Scotland were Chinese nationals.

China shut part of the Great Wall and suspended public transport in ten cities in an effort to contain the outbreak.

The move stranded millions of people at the start of the Lunar New Year holiday as authorities rush to contain a virus that has killed 26 people and infected more than 800.

The World Health Organization (WHO) has declared the new coronavirus an "emergency in China" but stopped short of declaring it of international concern.

Wuhan, a city of 11 million at the centre of the outbreak, is in virtual lockdown. Nearly all flights at Wuhan's airport have been cancelled and checkpoints block the main roads leading out of town.

As the city slides into isolation, pharmacies have begun to run out of supplies and hospitals have been flooded with nervous residents.

The city is rushing to build a 1,000-bed hospital by Monday, state media said. Despite the lockdown, the virus is already spreading further afield.

The vast majority of the cases and all of the deaths have been in China, but it has also been detected in Thailand, Vietnam, Singapore, Japan, South Korea, Taiwan, Nepal and the United States, as well as France.

The US Centers for Disease Control and Prevention said it had 63 patients under investigation, with two confirmed cases, both in people who had traveled to Wuhan.

Timeline of coronavirus outbreak
China rushes to build new hospital as virus spreads
Tests for coronavirus carried out at Belfast hospital
Shanghai Disney shuts to prevent spread of virus
What is coronavirus?
With millions on the move, China struggles to contain virus

Following a congressional briefing by health officials, Republican Senator John Barrasso, a former physician, said people in the United States with the virus may have been infected as long as 14 days earlier in China.

"We want to try to stop and prevent people from coming to the United States if they have it," Mr Barrasso told reporters, without providing any details of how that might be accomplished.

Airports around the world have stepped up screening of passengers from China. 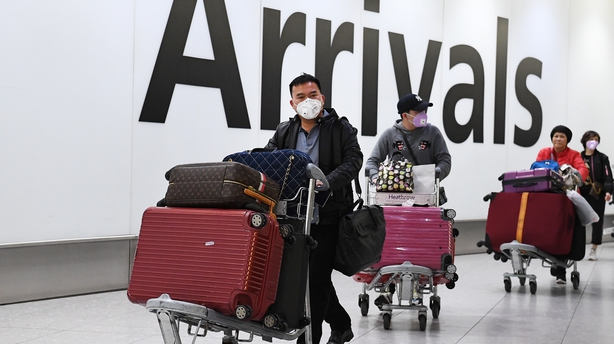 The newly-identified coronavirus has created alarm because there are still many unknowns surrounding it, such as how dangerous it is and how easily it spreads between people.

It can cause pneumonia, which has been deadly in some cases.

Symptoms include fever, difficulty breathing and coughing. Most of the fatalities have been in elderly patients, many with pre-existing conditions, the WHO said.

Most cases have been in Wuhan, where the virus is believed to have originated in a market that traded illegally in wildlife.

As China scrambles to contain the outbreak, it has suspended transport in ten cities in the central province of Hubei, where Wuhan is located, the Hubei Daily reported.

The country will take further, more targeted measures, state television reported, citing a State Council meeting today. It did not give further details. Week-long celebrations to welcome the Year of the Rat began today, raising fears the infection rate could accelerate as hundreds of millions of people travel to see family at home and abroad.

As part of the restrictions, some sections of the Great Wall near Beijing will be closed from Saturday, state media said.

Beijing's Lama Temple, where people traditionally make offerings for the new year, has closed, as have some other temples and the Forbidden City, the capital's most famous tourist attraction.

Shanghai Disneyland will close from Saturday. The theme park has a 100,000 daily capacity and sold out during last year's new year holiday.

Film premieres have been postponed and McDonald's suspended business in five cities in Hubei province.

Elsewhere, it is understood a patient arrived at the Royal Victoria Hospital in Belfast over the weekend showing symptoms that may or may not be associated with the condition.

There is no suggestion at this stage that the patient has coronavirus and tests being conducted are being treated as precautionary.