Catalan separatist leader Carles Puigdemont arrived at the European Parliament in Strasbourg and denounced Spain, which has issued a warrant for his arrest, for continuing to detain a former ally.

"There is one European Union member state, Spain, that does not respect ... the European rule of law," he declared as arrived to take up his seat as an MEP, accusing Spain of illegally detaining Oriol Junqueras.

Spain accused both Mr Puigdemont and Mr Junqueras of sedition for their part in organising a banned 2017 independence referendum in the Catalan region.

While Mr Puigdemont chose self-imposed exile in Belgium, Mr Junqueras was detained in Spain and convicted in October. He is now serving a 13-year jail sentence.

But both men were elected to the European Parliament in last May's European elections.

Last month, the European Court of Justice (ECJ) ruled that MEPs enjoy immunity from prosecution at the moment they are elected, leading to calls for Mr Junqueras to be freed and Mr Puigdemont to be allowed to sit as an MEP. 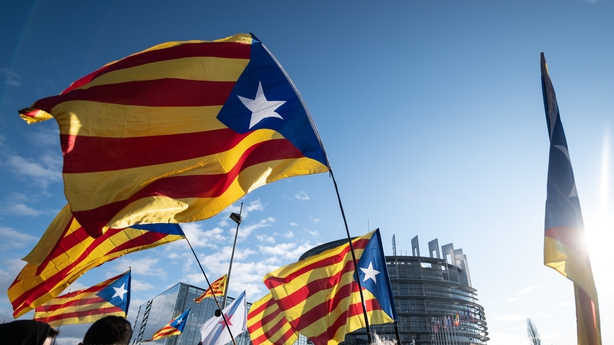 But the European Parliament, under speaker David Sassoli, stripped Mr Junqueras of his mandate, leaving him in jail.

Mr Puigdemont has been allowed to take up his seat, but Spain is seeking his arrest.

If Mr Sassoli decides to strip Mr Puigdemont of his immunity, the Catalan could find himself subject to Spain's European arrest warrant.

Mr Puigdemont missed the opening session of the parliament last July, fearing arrest if he travelled into France to reach the Strasbourg assembly.

But today, buoyed by the ECJ ruling, he dared make the short cross-border trip.

Mr Sassoli is expected to announce Mr Puigdemont's investiture later. But he may also inform members of Spain's request that they lift his immunity and allow the extradition process to continue.

If MEPs decide to lift immunity, in a process that usually takes weeks or even months, an examination of the extradition that Belgium suspended in January could be reactivated.

Catalonia's attempted secession triggered a crisis in Spain, which the newly formed coalition government in Madrid led by Prime Minister Pedro Sanchez is seeking to defuse through talks with the regional government.