Australian firefighters formed a guard of honour to bid a solemn farewell to colleague Andrew O'Dwyer, one of three volunteers killed in bushfires.

The 36-year-old was killed along with colleague Geoffrey Keaton on 19 December after a burnt tree fell in the path of their firetruck, causing it to roll.

A third firefighter was killed in a separate incident in late December in what authorities described as a "fire tornado". 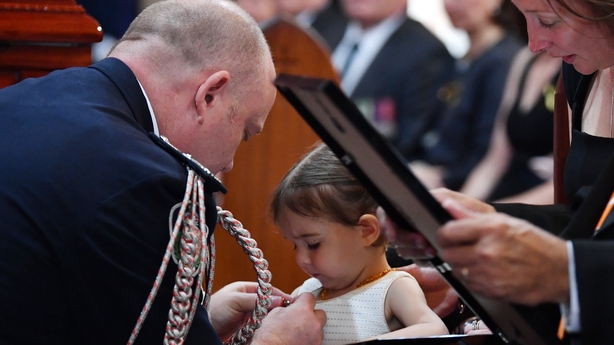 The toddler wore her father's medal and a fire helmet in front of his coffin.

Fires have razed more than 8.6 million hectares (21.3million acres) of land across Australia, killing 25 people and destroying or damaging thousands of homes, most in the southeast.

Prime Minister Scott Morrison, who has faced some criticism for his response to the fires, attended Mr O'Dwyer's funeral in Sydney. A firetruck from the suburb of Horsley Park, where Mr O'Dwyer was stationed, was inscribed with his name in white letters, a Rural Fire Services photograph from the funeral showed.

Read More:
Australia uses break in weather to plan for next onslaught of fires
Bushfire evacuees arrive in Melbourne

A funeral was held for his colleague last week, where his young son stood quietly while receiving his father's medal. 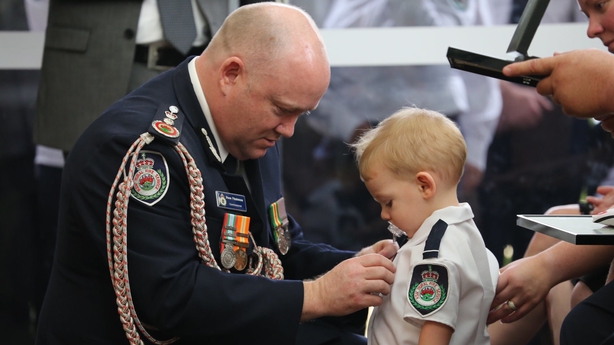 The medals were awarded by New South Wales Rural Fire Services Commissioner Shane Fitzsimmons who lost his own father 20 years ago in a bushfire during a hazard-reduction burn,according to media reports.

Lobby group Business Council of Australia said it would setup an AU$25 million trust that could be used to pay for the education of children who had lost parents while volunteering in disasters.