Nobel peace laureate Aung San Suu Kyi has rejected allegations of genocide against Myanmar in the UN's top court, despite admitting the army may have used excessive force against Rohingya Muslims.

Ms Suu Kyi denied "misleading and incomplete" claims by The Gambia that a 2017 military operation had attempted to exterminate the Rohingya, in a rare address by a state leader to the International Court of Justice (ICJ).

Once hailed worldwide as a rights icon for her defiance of the same generals she is now defending, Ms Suu Kyi also warned the Hague-based court that its involvement in the case risked "feeding the flames of extreme polarisation".

Nearly three-quarters of a million Rohingya fled to neighbouring Bangladesh after the Myanmar military launched a huge offensive that it said was in response to attacks by local militants.

"Regrettably, The Gambia has placed before the court a misleading and incomplete factual picture of the situation in Rakhine state," said Ms Suu Kyi, wearing traditional Burmese dress and flowers in her hair.

Brushing off international criticism, the 74-year-old civilian leader said Buddhist-majority Myanmar was dealing with an "internal armed conflict" and that troubles in the area go back centuries.

"Please bear in mind this complex situation and the challenge to sovereignty and security in our country," she said.

"Surely under the circumstances genocidal intent cannot be the only hypothesis." 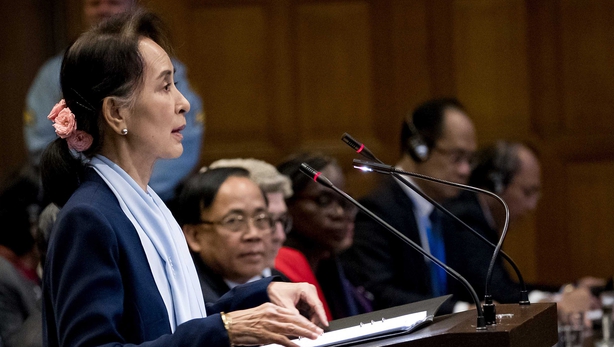 Lawyers for Myanmar argued that to prove genocide, international law required concrete proof of the intention to destroy a race of people.

ICJ judges have only once before ruled that genocide was committed, in the 1995 Srebrenica massacre in Bosnia.

The Gambia, a small west African state that is mainly Muslim, claims Myanmar breached the 1948 genocide convention and wants the court to take emergency measures to stop further violence.

It has the backing of the 57-nation organisation for Islamic Cooperation plus Canada and the Netherlands.

More than 730,000 Rohingya fled Myanmar after the military launched a crackdown in western Rakhine state in August 2017. 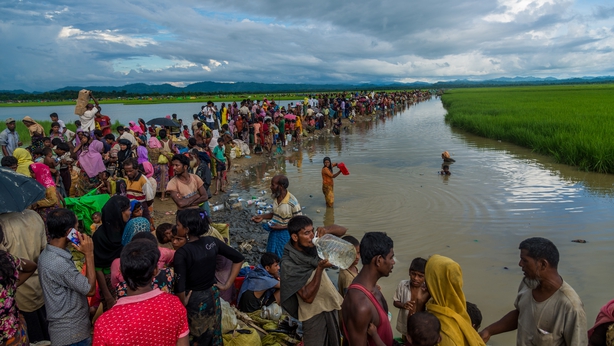 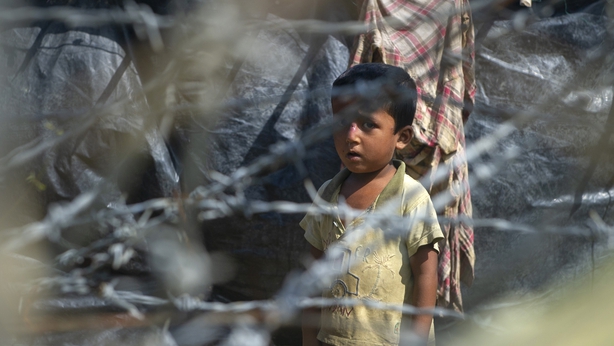 The case is being closely watched by the hundreds of thousands of Rohingya still in Bangladesh.

"Suu Kyi was our hope. But since she came out of imprisonment, she shattered it. How does she deny Myanmar army's atrocities?" Mohammad Yunus, Rohingya Imam at the Kutupalong Rohingya refugee camp, told AFP after hearing Suu Kyi speak.

Robi Ullah, another Rohingya, said: "She is bluntly lying in front of the highest court. Such a shame!"

In The Hague, a small group of pro-Rohingya supporters were also at the court, shouting: "Aung San Suu Kyi, shame on you!".

But Ms Suu Kyi's decision to personally lead her country's case at the court has proved popular at home, where the Rohingya are widely regarded as illegal immigrants.

Around 250 pro-Myanmar protesters gathered in front of the ICJ today, carrying placards with Aung San Suu Kyi's face reading "We stand with you".

"These allegations against Myanmar and Suu Kyi are rubbish," said Chomar Oosterhof a Burmese man living in the Netherlands.

A day after sitting through hours of graphic accounts of violence read out by The Gambia's lawyers, Suu Kyi admitted there may have been civilian casualties including some killed when a helicopter opened fire.

But she argued these were an inevitable part of the conflict.

"It cannot be ruled out that disproportionate force was used by members of the defence services... or that they did not distinguish clearly enough between fighters and civilians," she said.

Myanmar was leading its own investigation and "if war crimes have been committed", then its justice system would deal with them, she added.

"There will be no tolerance of human rights violations in Myanmar," she added.

Aung San Suu Kyi was once mentioned in the same breath as Nelson Mandela and Mahatma Gandhi, having won the Nobel Prize in 1991 for her resistance to Myanmar's junta, which ran the country for nearly half a century.

The military's rule was characterised by brutal civil conflicts, biting poverty and isolation.

After 15 years under house arrest, Ms Suu Kyi was freed in 2010 and led her party to victory in elections in 2015.

But her defence of the same military that once kept her locked up has since caused international condemnation.

Myanmar meanwhile faces a number of legal challenges over the fate of the Rohingya, including a probe by the International Criminal Court - a separate war crimes tribunal in The Hague - and a lawsuit in Argentina personally mentioning Suu Kyi.