A lack of documentation among the lorry trailer victims found in Essex means police will have to piece together their identities through fingerprints, DNA and other information.

Investigating officers will be examining post-mortem evidence and seeing whether distinguishing features such as teeth, tattoos, marks or scars could help with the identification process.

Detectives are also sifting through more than 500 exhibits, including mobile phones, to determine the identities of the dead, Essex Police said.

The force said in a statement: "There are 39 victims and each appears to have a bag of some description, clothes, and other belongings.

"So far we have over 500 exhibits, including mobile phones which have to be downloaded and the interrogation of mobile phones will be important for identifying the victims but also assisting the wider investigation, this needs to be done in forensic way so it will pass the evidential process for court later.

"As in any instance where a mass fatality has unfolded we cannot predict how long this process will take."

Whilst emphasising that he could not confirm the nationality of any victim, Mr Pasmore said information had been flowing into the casualty bureau at Essex Police from the Vietnamese community in the UK and abroad.

He explained that while fingerprint data could be gathered from Vietnam, accessing information from the UK Vietnamese community was a more "complex scenario".

Mr Pasmore said: "It may well be that there are people watching this tonight that are thinking 'I'm here in the UK and I'm here illegally and I want to come forward, I want to obviously try and identify my loved ones and be reunited', but they are frightened to come forward."

He explained he had met with a "facilitator" of one of the websites used by Vietnamese people to help build trust between the community and the police.

Mr Pasmore said he hoped it would help encourage people to "take that leap of faith" and make contact with his officers.

He added: "If you come in to us we will do everything we can to put our arm around you, take you through this process, identify as quickly as possible to see whether or not we do indeed have one of your loved ones involved in this tragic incident." 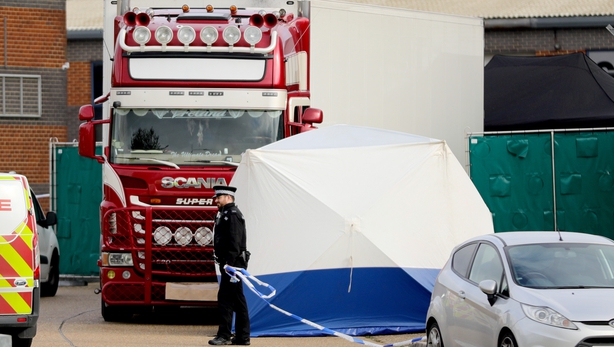 Mr Pasmore said investigating officers may have to try to track down families to get DNA comparisons to help identify the victims.

Links have also been established with Vietnamese officials in the UK, with Mr Pasmore meeting the country's ambassador this morning.

"We are building a really good and rapid rapport," Mr Pasmore said.

He added: "We are already agreeing a method of sharing fingerprints which may be a fast-track method of identifying some of our victims."