This is the face of the young Vietnamese woman whose family fear she is among 39 migrants found dead in the back of a lorry in the UK.

Pham Tra My, 26, sent a harrowing text to her family on Tuesday night. In it, she said she was suffocating.

That text was the last time the woman's family heard from her, despite their attempts to contact her since.

A Hanoi-based human rights, which is in contact with the family, posted a screenshot of the last text she sent her mother.

Hoa Nghiem of Human Rights Space also posted a photo of Tra My, along with a translation of the message that read: "I’m sorry Mom. My path to abroad doesn’t succeed. Mom, I love you so much! I’m dying bcoz I can’t breath (sic)."

The family told the BBC they had paid £30,000 for her to be smuggled to Britain.

A man and a woman, both aged 38 and from Warrington, Cheshire, were arrested on suspicion of 39 counts of manslaughter and people trafficking today.

An international investigation is under way as post-mortem examinations are due to begin on the bodies found in a refrigerated trailer in Grays, Essex, in the early hours of Wednesday.

Police said the eight women and 31 men were all believed to be Chinese nationals, but several Vietnamese families fear their relatives may be among the dead.

Liu Xiaoming, the Chinese Ambassador to the UK, said in a tweet: "Latest report from the Minister-Counsellor of my Embassy: Essex police emphasised they are still verifying the identity of the 39 deceased.

"We are waiting for the police to identify the victims. This is a number one priority."

The Vietnamese Embassy in London said it has not received any official confirmation from British authorities about the victims' identities. It said it has received requests from families in Vietnam asking for clarity on whether their relatives are among the dead.

The BBC reported that the families of two other Vietnamese people - a 26-year-old man and a 19-year-old woman - had contacted the broadcaster, also fearing their relatives might have been in the container.

Yesterday evening, the first 11 bodies were moved by a private ambulance with a police escort from the port of Tilbury to Broomfield Hospital in Chelmsford, while three more ambulances left the port on Friday afternoon.

Police have not confirmed whether the driver raised the alarm after finding the bodies, while his supporters have set up petitions online calling for his release.

It is not yet known when the victims entered the sealed refrigerated trailer, where temperatures can be as low as -25C, or the exact route it travelled.

Belgian officials said the trailer arrived at Zeebrugge at 2.49pm on Tuesday and left the port the same day en route to Purfleet.

The trailer arrived at Purfleet at around 12.30am on Wednesday, and the front section to which it was attached, known as the tractor, came from Northern Ireland via Holyhead in North Wales on Sunday.

The lorry and trailer left the port at Purfleet shortly after 1.05am, and officers were called to the Waterglade Industrial Park on Eastern Avenue in Grays at 1.40am.

Irish company Global Trailer Rentals Ltd (GTR) confirmed it owned the refrigerated part of the lorry and a spokesman said the company was "shellshocked" and "gutted" by the news.

The firm said the trailer had been leased on 15 October from its rentals yard in Co Monaghan at a rate of €275 a week.

It said it provided police with information about the person and company that leased the trailer, as well as offering to make tracking data available.

China has called for joint efforts to counter human smuggling, while vigils have been held in London and Belfast to pay tribute to the victims. 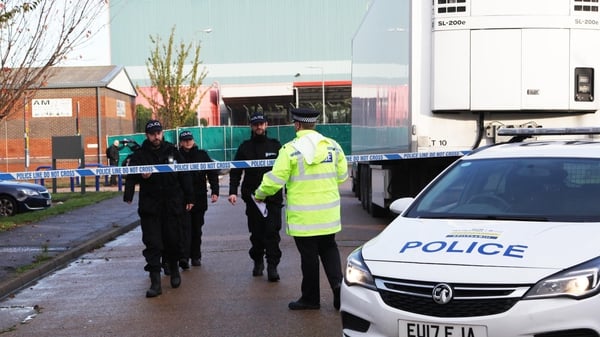