Chilean President Sebastian Pinera has announced a package of social measures aimed at stemming days of protests over economic inequality that have swept the country and claimed 15 lives.

Mr Pinera apologised to the nation for failing to anticipate the outbreak of social unrest.

He said his government had "received with humility and clarity the message Chileans have given us".

The leader vowed to increase the universal basic pension by 20%, cancel a recent 9.2% increase in electricity bills and propose a law that would see the state cover the costs of expensive medical treatment.

"I recognise this lack of vision and I apologise to my compatriots," Mr Pinera said in an address from the presidential palace in Santiago.

He also pledged a state subsidy to increase minimum wage to 350,000 pesos (€431) a month and said the government would introduce health insurance for medication, which is among the most expensive in the region.

Earlier in the day, he met the leaders of some of Chile's opposition parties as he sought a way to stem the country's worst violence in decades, initially triggered by an increase in metro fares.

The protests, which began on Friday, mushroomed into a broader outcry against social and economic woes, including a yawning gap between rich and poor.

The country is normally considered one of the most stable in Latin America. 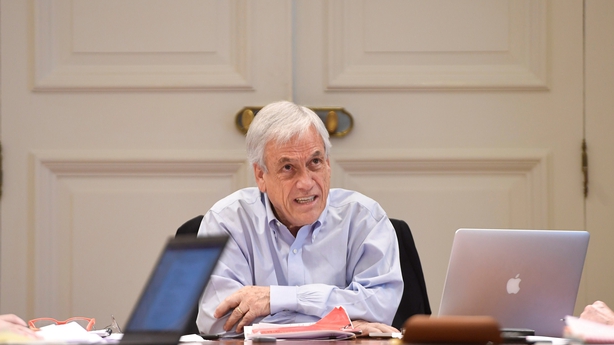 Mr Pinera quickly suspended the metro fare hike, but also declared that Chile was "at war against a powerful, implacable enemy," and imposed a state of emergency in Santiago and most of Chile's 16 regions.

Adopting a more conciliatory tone, he later called for yesterday's meeting, which was boycotted by three of the largest opposition groups, including the powerful Socialist Party.

The day's protests were mostly peaceful, particularly in the capital, although looting continued in other towns.

But with the country's largest union, the Workers' United Center of Chile (CUT) alongside 18 other social organizations, calling strikes and protests for tomorrow and Friday, the pressure had been on Mr Pinera to act.

The protest violence is the worst to hit Chile since the country's return to democracy after the 1973-1990 rightwing dictatorship led by General Augusto Pinochet.

It saw widespread looting, arson and protesters clash with the 20,000 security forces deployed on the streets.

Yesterday, the army announced a nighttime curfew (8pm to 5am) for the fourth day in a row.