The death toll from a violent weekend of protests in Chile has risen from seven to 11, Santiago governor Karla Rubilar told reporters today

"There were three deaths the day before yesterday and eight deaths yesterday," all in the greater Santiago area, Mr Rubilar said.

Violent protests, initially against a hike in metro fares, first broke out on Friday with many metro stations attacked, buses torched and traffic lights smashed while several supermarkets were looted and burnt.

Police and the military fired tear gas and used water cannon against protesters in the city as clashes over price hikes and social inequality raged through a third day.

Almost all public transport was paralysed in Santiago, with shops closed and many flights cancelled at the international airport, leaving thousands of people stranded and unable to leave due to the curfew.

After an emergency meeting late last night, President Sebastián Piñera defended his decision to call a state of emergency.

He also stood over his decision to deploy troops onto the streets for the first time since Augusto Pinochet's military dictatorship between 1974-1990.

"Democracy not only has the right, it has the obligation to defend itself using all the instruments that democracy itself provides, and the rule of law to combat those who want to destroy it," Mr Piñera said. 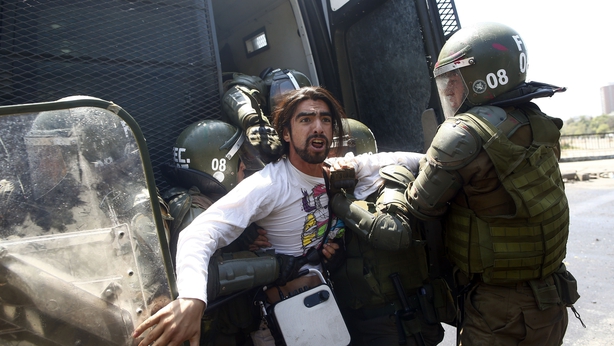 The state of emergency was extended yesterday, with Interior and Security Minister Andres Chadwick saying new decrees were being drawn up for Antofagasta in the north, Valdivia in the south, and other cities such as Valparaiso, Temuco and Punto Arenas.

Firefighters said five people died in a garment factory burned by rioters in Renca, a northern suburb of Santiago.

Earlier, Mr Chadwick said two women burned to death after a shop owned by US retail chain Walmart was set alight in the early hours.

One victim, who authorities initially said had died in hospital, suffered burns on 75% of her body.

Authorities reported 103 serious incidents throughout the country with 1,462 people detained - 614 in Santiago and 848 in the rest of the country.

Protesters set fire to buses, smashed up metro stations, knocked down traffic lights, ransacked shops and clashed with riot police in Santiago and other cities.

During the curfew from 7pm (11pm Irish time) until dawn, people should "be calm and all in their homes", defence official General Javier Iturriaga announced.

What started earlier in the week as a protest against a hike in metro fares escalated dramatically on Friday as demonstrators expressed anger over social inequality and the government's liberal economic system. 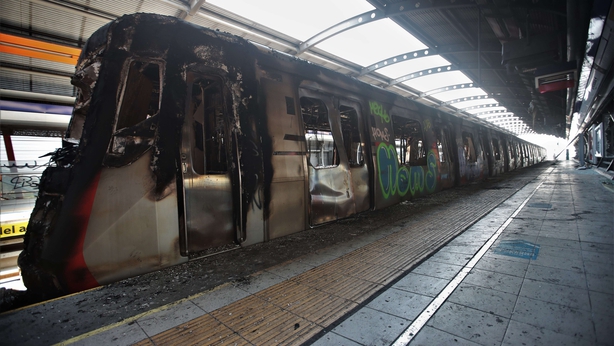 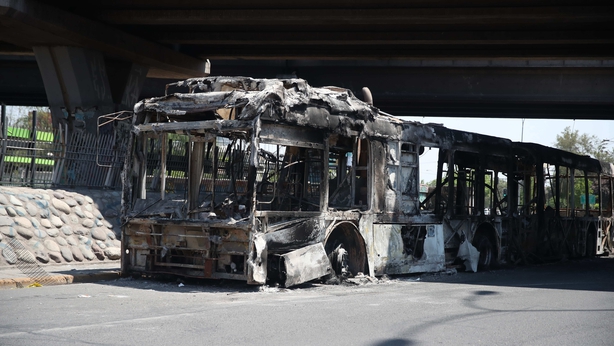 On Saturday, Mr Piñera announced he was suspending the fare increase.

He acknowledged that those in the streets had "good reasons" to protest but called on them "to demonstrate peacefully".

The appeal failed to prevent further rioting and looting.

Dozens of protesters torched a building belonging to Chile's oldest newspaper, El Mercurio, in Valparaiso on Saturday evening, while elsewhere a metro station, supermarkets and other stores were set on fire.

Santiago's metro system, South America's largest and most modern and used by around three million people a day, was shut down on Friday as protesters burned and vandalised stations.

Louis de Grange, president of the state Metro SA company, told Canal 13 the "brutal destruction" of the service had caused more than $300 million in damage. 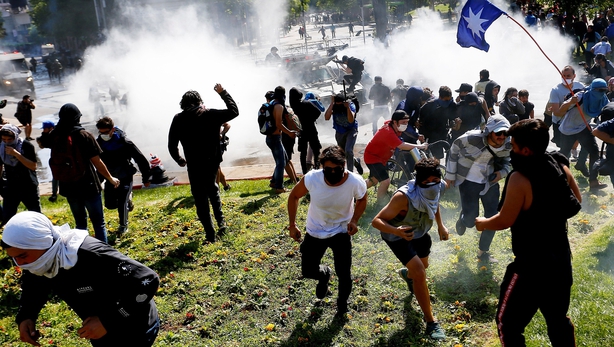 The government said the hike, which followed a 20-peso increase in January, was driven by rising oil prices and a weakening peso.

Initially, students and others responded by fare-dodging, but underlying social tension quickly bubbled to the surface.

On Friday, the headquarters of the ENEL Chile power company and a Banco Chile branch, which are both in the centre of Santiago, were set on fire and heavily damaged.

Chile has the highest per capita income of Latin America at $20,000, with expected economic growth this year of 2.5% and just 2% inflation.

But there is widespread frustration with economic policies that have virtually privatised all health care and education, at a time that falling pensions and rising costs of basic services have exacerbated social inequality.