Turkish warplanes and artillery hit Kurdish militia targets in northeast Syria on the third day of an offensive that has killed hundreds of people, forced tens of thousands to flee and turned Washington's establishment against US President Donald Trump.

This morning, Turkish jets and artillery struck around Syria's Ras al Ain, one of two border towns that have been the focus of the offensive.

Gunfire could also be heard inside the town, said a Reuters journalist in Ceylanpinar, on the Turkish side of the border.

He said a convoy of 20 armoured vehicles carrying Syrian rebels entered Syria from Ceylanpinar this morning.

Some of them made victory signs, shouted "Allahu akbar" (God is greatest) and waved Syrian rebel flags as they advanced towards Ras al Ain.

Turkey's Defence Ministry said that in overnight operations the Turkish military and its Syrian rebel allies killed 49 Kurdish militants. It says it has killed 277 militants in total. 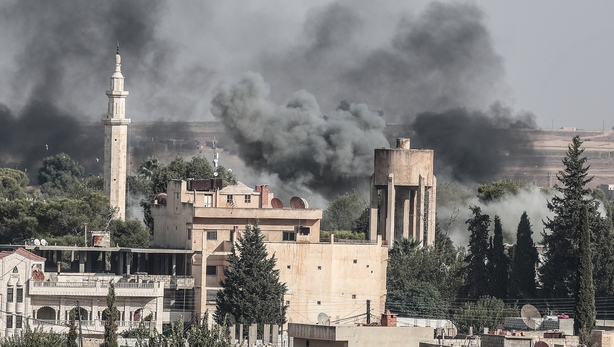 The ministry said one Turkish soldier was killed in a clash yesterday during the offensive, which is targeting the Syrian Democratic Forces (SDF), led by the Kurdish YPG militia.

Kurds said they were resisting the assault. At least 23 fighters with the SDF and six fighters with a Turkish-backed Syrian rebel group had been killed, said the Syrian Observatory for Human Rights.

NATO member Turkey says the operation is necessary for border security against the YPG militia, which it designates a terrorist group because of ties to militants who have waged a decades-old insurgency in southeast Turkey in which more than 40,000 people have been killed.

Turkey has also said it intends to create a "safe zone" for the return of millions of refugees to Syria.

Turkey's Ambassador to Ireland, Levent Murat Burhan, has said Turkey's offensive in north eastern Syria will continue until "all terrorist elements are wiped out" and border security is ensured.

He said the operation being carried out is not against Kurdish people but against the terrorist group YPG (an off-shoot of PKK) who he says claim to represent the Kurdish population in this part of Syria.

He said protecting civilians in north eastern Syria is Turkey's "top priority" as they try to eliminate a terrorist threat.

He said once the operation is complete, they hope it will give a chance to the one million displaced Syrians, including Kurds, to return to their land.

He defended Turkey's action saying already 300,000 Syrian Kurds have fled to Turkey for refuge from north-eastern Syria because of the terrorism carried out by PKK and YPG.

"This shows they are not there to protect Kurdish people"

He said the terrorist groups are being delivered weapons from abroad to carry out attacks and in some casees they kidnap children "who are forced to fight in their ranks".

The ambassador said the Turkish operation in Syria is not targeting any civilian areas and is "only targeting terrorist elements." He could not say how long their offensive will go on for but was adamant that Turkish forces will remain there until all terrorist threats are eliminated.

He said Turkey had to act as there is a "concrete security threat" against Turkish security forces on the border and Syrians in the region.

"We have been exposed to more than one hundred cases of hostile attacks, the shelling of cities near the border. Also it is not only threatening Turkish people but perpetrated attacks againt Syrians."

....We have one of three choices: Send in thousands of troops and win Militarily, hit Turkey very hard Financially and with Sanctions, or mediate a deal between Turkey and the Kurds!

Since Mr Trump pulled US troops out of the way following a phone call with Turkish President Tayyip Erdogan, the incursion has opened a major new front in the eight-year-old Syrian civil war and drawn fierce criticism internationally.

"We have one of three choices: Send in thousands of troops and win Militarily, hit Turkey very hard Financially and with Sanctions, or mediate a deal between Turkey and the Kurds!" Mr Trump said in a Twitter.

"I hope we can mediate," Mr Trump said when asked about the options by reporters at the White House.

Without elaborating, Mr Trump said the United States was "going to possibly do something very, very tough with respect to sanctions and other financial things" against Turkey.

Explainer: Who is fighting in Turkey's assault on northeast Syria https://t.co/LZ3ptinNRZ