Canadian-American cosmologist James Peebles and Swiss astronomers Michel Mayor and Didier Queloz won the Nobel Physics Prize for research that increases the understanding of our place in the Universe.

Mr Peebles won one-half of the prize "for theoretical discoveries that have contributed to our understanding of how the Universe evolved after the Big Bang," professor Goran Hansson, secretary general of the Royal Swedish Academy of Sciences, told a press conference.

Mr Mayor and Mr Queloz shared the other half for the first discovery, in October 1995, of a planet outside our solar system, an exoplanet, orbiting a solar-type star in the Milky Way.

"Their discoveries have forever changed our conceptions of the world," the jury said.

Developed over two decades since the mid-1960s, Mr Peebles' theoretical framework is "the basis of our contemporary ideas about the Universe."

Mr Peebles built upon Albert Einstein's work on the origins of the Universe by looking back to the millenia immediately after the Big Bang, when light rays started to shoot outwards into space.

Using theoretical tools and calculations, he drew a link between the temperature of the radiation emitted after the Big Bang and the amount of matter it created.

His work showed that the matter known to us, such as stars, planets, and ourselves, only make up 5%, while the other 95% are made up of "unknown dark matter and dark energy".

In a telephone interview at the press conference, Mr Peebles said that what those elements actually are is still an open question.

"Although the theory is very thoroughly tested, we still must admit that the dark matter and dark energy are mysterious," he said.

He also advised young people contemplating a career in science that, while awards were "charming" and "very much appreciated, they should do it for the love of it.

"You should enter science because you are fascinated by it. That's what I did."

James Peebles, 84, is Albert Einstein Professor of Science at Princeton University in the United States, while Michael Mayor, 77, and Didier Queloz, 53, are both professors at the University of Geneva.

Mr Queloz also works at the University of Cambridge in Britain.

Using custom-made instruments at their observatory in southern France in October 1995, Mr Mayor and Mr Queloz were able to detect a gaseous ball similar in size to Jupiter, orbiting a star 50 light years from our own Sun.

Harnessing a phenomenon known as the Doppler effect, which changes the colour of light depending on whether an object is approaching or retreating from Earth, the pair proved the planet, known as 51 Pegasus b, was orbiting its star.

The Nobel jury noted that the discovery "started a revolution in astronomy" and since then over 4,000 exoplanets have been found in our home galaxy. 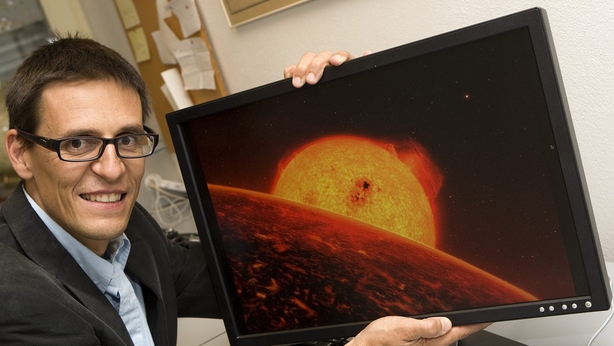 In a statement, the two astronomers hailed their win as "simply extraordinary", saying the discovery was "the most exciting of our careers".

Professor Martin Rees of the University of Cambridge said this year's awards also seemed to show a "welcome broadening of the Nobel criteria."

"In the past, astronomy has been included primarily when the discovery involves some new physics," Rees said.

The trio will receive the prize from King Carl XVI Gustaf at a formal ceremony in Stockholm on 10 December, the anniversary of the 1896 death of scientist Alfred Nobel who created the prizes in his last will and testament.