The G7 has agreed to spend more than €20 million on the Amazon, mainly to send fire-fighting aircraft to tackle the huge blazes engulfing the world's biggest rainforest, the presidents of France and Chile announced.

The G7 - comprising Britain, Canada, France, Germany, Italy, Japan and the United States - has also agreed to support a medium-term reforestation plan which will be unveiled at the UN in September, France's Emmanuel Macron and Chile's Sebastian Pinera said at the G7 summit in southwest France.

Brazil would have to agree to any reforestation plan, as would local communities.

Meanwhile hundreds of new fires have flared up in the forest, according to new data, even as military aircraft dumped water over hard-hit areas.

Smoke choked Port Velho city as fires raged in the northwestern state of Rondonia where fire-fighting efforts are concentrated. Swaths of the remote region have been scorched by the worst fires in years, sending thick smoke billowing into the sky.

Experts say increased land clearing during the months-long dry season to make way for crops or grazing has aggravated the problem this year.

Brazil's President Jair Bolsonaro has ordered an investigation into reports that rural producers in the northern state of Para held a "day of fire" on 10 August in a show of support for the far-right leader's efforts to weaken environmental protection monitoring in the region.

The initiative by the G7 was announced after leaders meeting in the resort of Biarritz held talks on the environment, which focused on the fires destroying chunks of the Amazon.

Mr Macron had made the issue one of the summit's priorities, and threatened to block a huge new trade deal between the EU and Latin America unless Mr Bolsonaro, a climate change sceptic, takes serious steps to protect the Amazon.

"We must respond to the call of the forest which is burning today in the Amazon," he said. 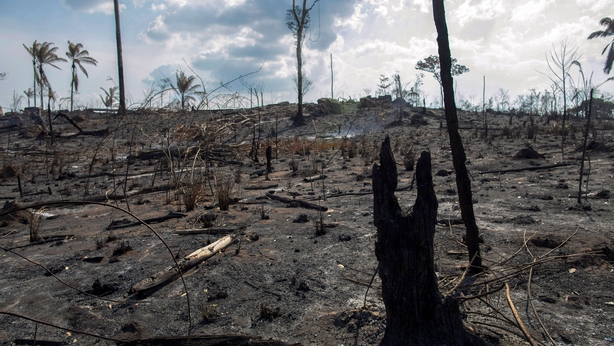 Nearly 80,000 forest fires have been detected in Brazil since the beginning of the year, a little over half in the Amazon region.

Under pressure from the international community to save a crucial area for maintaining a stable global climate, Mr Bolsonaro finally deployed two C-130 Hercules aircraft yesterday to douse the fires.

Trump says he does not want regime change in Iran
Brazilian air force dumps water on Amazon wildfires
Why is part of the Amazon burning?

"He wasn't in the room, but his team was," Mr Macron told a news conference after the climate talks.

"You shouldn't interpret the American president's absence... the US are with us on biodiversity and on the Amazon initiative."

"He has made some extraordinarily rude comments about my wife," he said when asked at the press conference to react to statements about him by the Brazilian government.

"What can I say? It's sad. It's sad for him firstly, and for Brazilians," he added.