French President Emmanuel Macron has said that preparations were under way for a meeting between Iranian President Hassan Rouhani and US President Donald Trump in the coming weeks to find a solution to the nuclear standoff.

"Two things are very important for us: Iran must never have nuclear weapons, and this situation should never threaten regional stability," he told a news conference at the end of a meeting of G7 leaders in Biarritz, France.

He said that discussions were under way to arrange a summit.

"What I hope is that in coming weeks, based on these talks, we can manage to see a summit between President Rouhaini and President Trump."

Mr Trump and Mr Rouhani are both expected to be at the UN General Assembly in New York at the end of September.

It comes after Mr Trump said he wanted to see a strong Iran and was not seeking regime change in Tehran, adding that the way Iranians were being forced to live was unacceptable.

"I'm looking at a really good Iran, really strong, we're not looking for regime change. You've seen how that works over the last 20 years, that hasn't been too good," Mr Trump told reporters at the summit.

He said he had not been surprised that France had invited Iranian Foreign Minister Mohammad Javad Zarif for talks yesterday.

French President @EmmanuelMacron and US President @realDonaldTrump give a joint closing news conference after G7 summit in Biarritz https://t.co/70F8hbJDoD

However, he said he had not wanted to see Mr Zarif himself, adding that it was too soon for such an encounter.

"Or they can be poor as can be. And I tell you what, I don't think it’s acceptable the way they are being forced to live in Iran," he said.

Meanwhile, British Prime Minister Boris Johnson said there is "clearly an opportunity now for Iran to come back into compliance with the nuclear deal".

Mr Zarif's presence had not been expected and it represented a gamble by host Emmanuel Macron who is seeking to soothe spiralling tensions between Iran and the United States.

Last month, the US government imposed heavy sanctions seeking to hamper Mr Zarif's travel, and effectively banning him from the United States.

"Road ahead is difficult. But worth trying," Mr Zarif tweeted after meeting Mr Macron and French Foreign Minister Jean-Yves Le Drian, as well as British and German representatives.

His pro-diplomacy approach was further shared by Mr Rouhani, who has come out strongly in favour of talks, defending the foreign minister's surprise visit to a G7 summit.

"I believe that for our country's national interests we must use any tool," Mr Rouhani said in a speech aired live on state television.

"And if I knew that I was going to have a meeting with someone that would (lead to) prosperity for my country and people's problems would be resolved, I would not hesitate."

"The main thing is our country's national interests," he said to a round of applause from those gathered at an event marking government achievements in rural areas.

Mr Trump also told today's press conference that Beijing had "no choice" but to give in to US pressure in their trade war as Washington seeks to force China into deep reforms of its economy.

"I'm not sure they have a choice," he said after earlier remarks indicating there could be a thaw in the bruising year-long dispute that has seen tariffs imposed on billions of dollars' worth of goods by both sides.

"I don't mean that as a threat. I don't think they have a choice," he said.

The trade war escalated on Friday, with both sides levelling more tariffs on each other's exports.

China's lead negotiator in the US trade talks said earlier that Beijing was willing to resolve the trade dispute through "calm negotiations" and resolutely opposed the escalation of the conflict.

The G7 meeting closed with discussions of world problems including the fires in the Amazon rainforest, but has been overshadowed by Mr Trump's trade wars and questions over the group's unity. 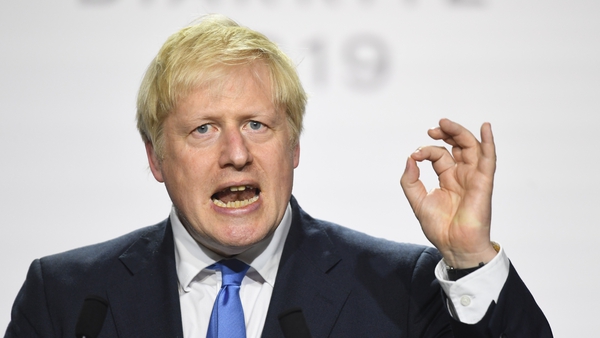 Brexit can go down to the very last minute, says Johnson