Boeing has announced some $6.6bn in additional costs because of the 737 MAX crisis, further pressuring profitability as the global grounding of the plane following two deadly crashes drags on.

Boeing said that second-quarter earnings would be hit by $4.9bn in one-time after-tax costs to compensate airlines for disruptions and plane delivery delays due to the MAX grounding.

Profits will also be weighed down by another $1.7bn in costs due to the 737 MAX's lower production rate, the company said in a statement after the stock market closed.

The MAX has been grounded since mid-March following two crashes that killed 346 people, dual disasters that have tarnished Boeing's reputation and sparked numerous lawsuits from the families of victims.

There is still no firm timetable to bring the planes back into service.

"This is a defining moment for Boeing. 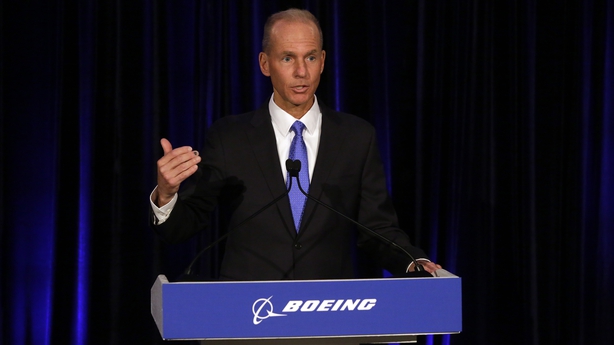 Boeing also said it hopes to receive regulatory approval to return the aircraft to service early in the fourth quarter.

But this timeline was only the company's "best estimate" and actual timing could differ, Boeing said.

The company is due to report second-quarter earnings on 24 July.

Read more:
Ryanair to close some bases due to Boeing 737 MAX delays
Boeing puts cost of 737 MAX crisis at $1 billion
Boeing wins confidence of shareholders as it prepares for 737 MAX test flight

Earlier, Southwest Airlines pushed back its target date for the returning the MAX to service by about a month to 2 November, saying the timeframe was "still uncertain".

The US Federal Aviation Administration late last month identified a fresh problem with the 737 MAX during simulator testing, further clouding the outlook for the plane's return to service.

The FAA "is following a thorough process, not a prescribed timeline, for returning the Boeing 737 MAX to passenger service," an agency spokesman said. "The FAA will lift the aircraft's prohibition order when we deem it is safe to do so."

Michel Merluzeau, an analyst at AIR Insight Research, told AFP that it would be "good news" for Boeing if the planes do return to service in the first quarter of 2020.

The latest costs add to the overall financial hit from the crisis. In April, Boeing disclosed $1bn in additional costs due to lowering the production level of the 737 MAX. The company last month announced it would give $100m to communities and families affected by the 737 MAX disasters.

But those donations have not silenced critics of the company, including from Paul Njoroge who castigated the company as greedy and reckless before a congressional panel on Wednesday.

"Boeing should not be allowed to act like a mere investment company extracting wealth to super-charge shareholder returns at the expense of safety and quality," said Mr Njoroge, whose wife, three children and mother-in-law died in the 10 March Ethiopian Airlines disaster.

Boeing has been widely criticised over its development of the 737 MAX, which included a flight handling system called the Maneuvering Characteristics Augmentation System that has been seen as a factor in both crashes.

In both crashes, the MCAS pointed the plane sharply downward based on faulty sensor readings, hindering pilot control after take-off, according to preliminary results from crash investigations.

Pilots have said they were not adequately trained on the MCAS system and that it was not disclosed to them. The FAA has said it was kept in the dark for more than a year about a problem with a sensor linked to the system.