The World Health Organization has said a key emergency committee would meet following confirmation that an Ebola outbreak in Democratic Republic of Congo had spread to neighbouring Uganda.

The panel will meet on Friday to determine whether to declare the outbreak "a public health emergency of international concern," a major shift in mobilisation against the disease, it said.

A five-year-old boy in Uganda has has died of Ebola, the country's health minister confirmed, as his grandmother and younger brother also tested positive for the virus after joining the child on a visit to neighbouring DR Congo.

It marks the first known cross-border spread in an epidemic that began in eastern DRC last August. More than 2,000 cases have been recorded there, around two-thirds of them fatal.

Uganda's health ministry said yesterday that a woman of Congolese origin, who is married to a Ugandan, had gone to the DRC with her mother, two children and one other family member to take care of her father, who later died of Ebola.

Upon their return to Uganda, the five-year-old boy was vomiting blood and taken to hospital, and lab tests revealed he had contracted the haemorrhagic virus. 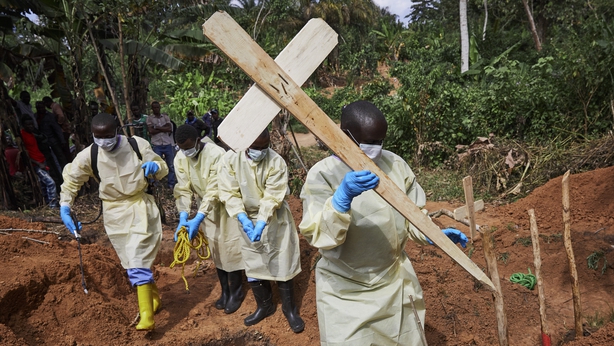 "We have three cases of Ebola confirmed. Unfortunately, we lost the boy who was first tested and was found positive," Ms Aceng said.

"We have put all those that got in contact with the boy in isolation ward for monitoring."

Eight other people in contact with the family had been tracked down and were being monitored.

They, and frontline health workers, would be vaccinated Friday with a new drug designed to protect them against the virus.

While they were in the DRC, the family were identified as having been in contact with an Ebola patient and placed under quarantine, Congolese Health Minister Oly Ilunga Kalenga said.

But they left the isolation ward and crossed into Uganda, he added.

"As soon as they crossed, we contacted the Ugandan authorities," he told AFP in an interview.

East Africa has been on high alert since the outbreak was declared in the eastern DRC provinces of North Kivu and Ituri last August.

According to the WHO, Uganda has vaccinated nearly 4,700 health workers in 165 facilities.

Uganda has experienced several outbreaks in the past, most recently in 2012, while in 2000 more than 200 people died in an outbreak in the north of the country.

South Sudan has also declared a state of alert and vaccinated health workers.