Volodymyr Zelenskiy, a comedian-turned-poltician, has dissolved the Ukranian parliament during his inauguration speech as his first act as president of the eastern European nation.

During the speech he promised that as hard as he had worked in the past to make Ukrainians laugh, he would now work to keep them from crying.

Mr Zelenskiy dismissed the parliament still dominated by loyalists of his defeated predecessor, setting up an election in two months in which his new party has a chance to win its first seats.

The inauguration day was marked by informal moments that conveyed the outsider persona that helped carry the political novice to a landslide victory last month.

Mr Zelenskiy high-fived cheering supporters who held their arms outstretched outside the Soviet-era parliament building, and stopped for a selfie with the crowd.

At one point he jumped up to kiss a man on the forehead. He later eschewed a motorcade to make his way to his new office on foot.

"Dear people, during my life I tried to do everything to make Ukrainians smile," he said in his speech to parliament.

"In the next five years, I will do everything, Ukrainians, so that you do not cry." 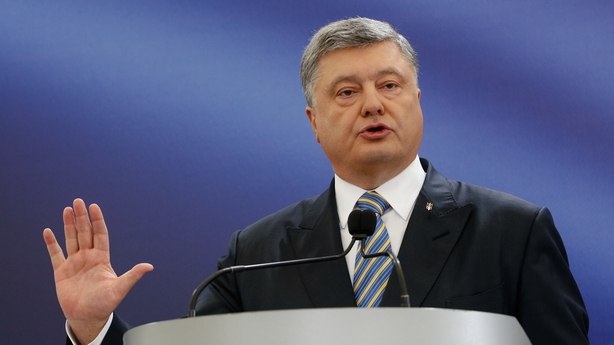 However there were already signs of friction with a political class in which Mr Zelenskiy has few allies.

The decision to dissolve parliament prompted the resignation of Prime Minister Volodymyr Groysman, who came to power in 2016 as part of Mr Poroshenko's coalition. Mr Groysman said he was stepping down to fight the upcoming snap election.

"I proposed to the president, the parliament, that we together form a new agenda and very quickly begin to make decisions that would make Ukraine stronger. The president has chosen a different path," Mr Groysman said. 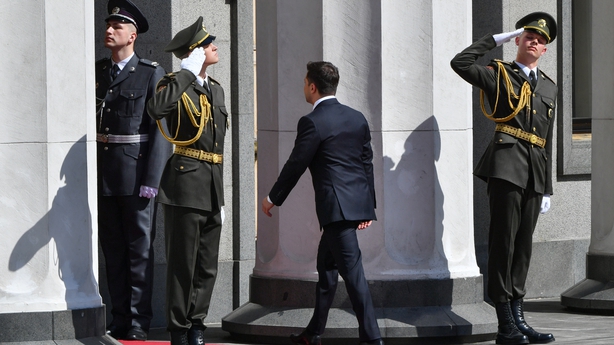 Mr Zelenskiy grew to national fame playing the TV comedy role of a schoolteacher who unexpectedly becomes president after a pupil films him making a foul-mouthed tirade against corrupt politicians and posts the video online.

His campaign exploited the parallels with that fictional narrative, portraying him as an everyman who would stand up to a crooked political class.

In his inauguration speech, Zelenskiy called on officials to take down the customary portraits of the president that hang in their offices, and put up pictures of their children instead.

Mr Groysman, a public face of a reform programme aimed at attracting foreign aid, will step down on Wednesday in the same week as a mission from the International Monetary Fund is set to come to Kiev for talks about a $3.9 billion loan programme.

The government hopes to secure a $1.3bn tranche within weeks.

Ukraine's most pressing issue is conflict with its neighbour Russia, which annexed its Crimea region in 2014 and backed separatists in a war in the east that has killed 13,000 people.

Mr Zelenskiy said his first task was to achieve a ceasefire, adding that dialogue could only happen after the return of Ukrainian territory and prisoners of war.