The dramatic revision of the death toll in Sri Lanka's Easter Sunday bombings, which has been cut by more than 100, is a grim indicator of the power of the deadly blasts.

The force of the explosions so badly mutilated bodies that parts of victims were wrongly collated and identified in the initial confusion, officials said.

"Many of the victims were badly mutilated ... There was double counting," the health ministry said in explaining the new death toll of 253, down from 359 announced on Wednesday.

"In explosions like this, bodies get badly mutilated. It is not always possible to have complete bodies," he said.

"This is why it was initially difficult to arrive at a precise toll."

The sheer force of the suicide bombings at three churches and three hotels is clear from the damage sustained by the targeted buildings.

At St Sebastian's Church in Negombo, north of the capital, the explosion was so powerful it brought down much of the roof, showering the congregation in roof tiles, and sheared the plaster off walls.

Authorities are still investigating details on the bombs used in the six attacks, which were followed by two more explosions as police raided addresses searching for suspects. 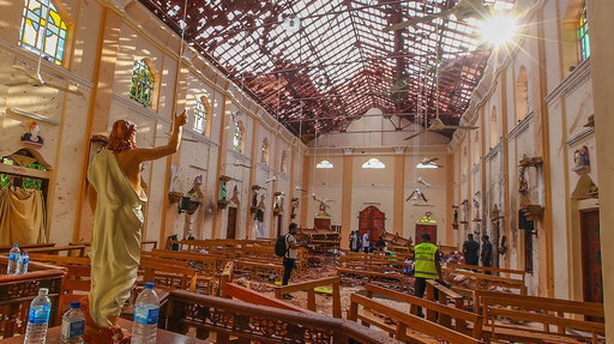 So far, they believe that the attackers did not use C4, the explosive that was the weapon of choice for bombings carried out by the country's Tamil militants during their deadly decades-long insurgency, which ended in 2009.

But the precise nature of the explosives and the size of the bombs is still being worked out.

One clue lies in images of one of the men believed to be among the attackers, who was captured on CCTV just before he entered St Sebastian's.

He is seen carrying what appears to be a full and heavy backpack, before entering the church seconds before a massive blast.

Sources close to the investigation said they believe the attackers may have used an explosive less powerful than C4, but packed their bombs with larger quantities of it to render their weapons more deadly.

The Islamic State group has claimed that it was behind the attacks and published a video showing eight men but provided no evidence of direct involvement.

Meanwhile the country’s president has said an Islamic extremist believed to have played a key role in the bombings led an attack against a Colombo hotel.

"What intelligence agencies have told me is that Zahran was killed during the Shangri-La attack," President Maithripala Sirisena told reporters, referring to Zahran Hashim, leader of a local extremist group.

He added that Hashim led the attack against the high-end hotel and was accompanied by a second bomber, identified only as "Ilham".

He said the information came from military intelligence and was based in part on CCTV footage recovered from the scene.

Hashim appeared in a video released by IS after it claimed the bombings, but his whereabouts after the blasts were not immediately clear.

Security forces had been on a desperate hunt for Hashim, believed to be around 40, after the government named the group he led - the National Thowheeth Jama'ath - as its prime suspect.

Muslims in Sri Lanka have been urged to pray at home and not attend mosques or churches after the intelligence services warned of possible car bomb attacks, amid fears of retaliatory violence.

The US embassy in Sri Lanka also urged its citizens to avoid places of worship over the coming weekend after authorities reported there could be more attacks targeting religious centres.

Nearly 10,000 soldiers are being deployed across the state to carry out searches and provide security for religious centres.