The SpaceX Dragon capsule successfully splashed down in the Atlantic Ocean after more than six days in space, completing its demonstration mission for US space agency NASA.

"Good splashdown of Dragon confirmed!" the SpaceX account tweeted along with an image of the capsule showing its four main white and orange parachutes deployed as two boats sped toward it.

Live footage from NASA showed the capsule's main parachutes opened without a hitch.

It splashed down at 8.45am local time (1.45pm Irish time), completing a mission to demonstrate that it could reliably and safely carry astronauts to the International Space Station (ISS).

Launched on Saturday from the Kennedy Space Center in Florida, Dragon docked at ISS the following day before detaching early today for its return to Earth.

It represents the first private space mission to the ISS, as well as the first time a space vessel capable of carrying people was launched by the US in eight years.

SpaceX, founded by Elon Musk in 2002, was selected along with the Boeing group by NASA in 2014 to develop the next generation of space vehicles for US astronauts, after the end of the 1981-2011 space shuttle programme.

Only a test dummy was aboard for the test, but the first manned flight aboard Dragon is scheduled for July with two astronauts -- a date that could be postponed until later this year. 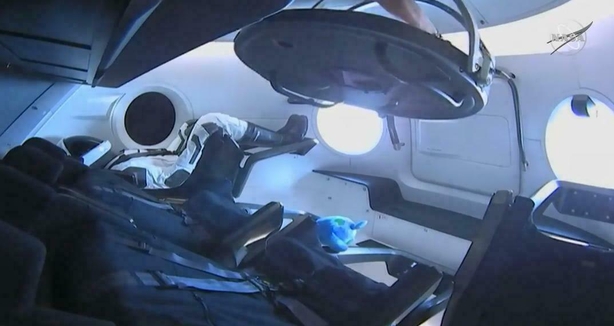 .@SpaceX's recovery fast boats approached the #CrewDragon as it splashed down in the Atlantic Ocean. Up next, the team will hoist the spacecraft on the Go Searcher recovery ship. pic.twitter.com/anIUB6XQzr