The United Nations and the Palestinian Authority have appealed for $350 million in aid for Palestinians next year, saying much more was needed but they had to be realistic after a year of funding cuts.

Donations were down in many areas around the world, he said.

"Humanitarian actors are faced with record-low funding levels of this year, at the same time we face massive and increasing needs," Mr McGoldrick said in Ramallah in the Israeli-occupied West Bank.

"We will be able to assist fewer people this year, 1.4 million people are being targeted as opposed to 1.9 million last year."

He said agencies faced many difficulties, including the politicisation of aid by "political forces which are using aid or tampering with aid" and attacks on their work by those intent on "delegitimising some of the work of the humanitarian actors".

More than three quarters of the funds sought would go to Gaza, the appeal organisers said, because the densely populated coastal area faced a "dire humanitarian situation" after years of an Israeli-led blockade, Palestinian political divisions and casualties from demonstrations and hostilities.

Washington promised $365m to UNRWA - the UN agency that looks after Palestinian refugees - in 2018, but paid only a first installment of $60m before announcing in August that it would halt all future donations.

The move was widely seen as a means of pressuring the Palestinian leadership to enter peace negotiations with Israel.

Palestinian Social Development Minister Ibrahim Al-Shaer said they would not give in to pressure. 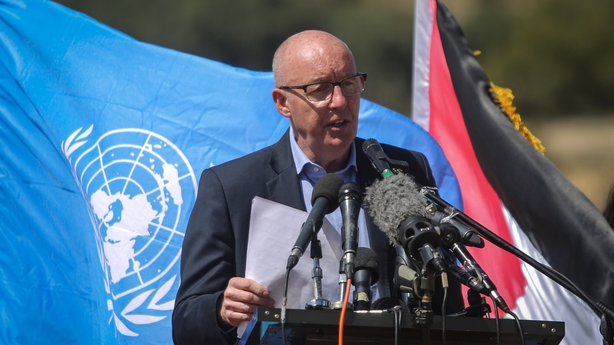 "The position of the Palestinian people, its leadership and its government is that we will not drop our legitimate rights for aid and money," he said.

Mr McGoldrick said the cuts to UNRWA had caused a "massive impact" on the agency itself, but also led to shortages elsewhere.

"Some donors have probably filled the gaps left by the US, and that has maybe turned them away from other funding possibilities for us in the humanitarian world," he said.

The Palestinians want to establish a state in the West Bank, Gaza and East Jerusalem - territories that Israel captured and occupied in the 1967 Middle East war.

Israel says that its West Bank barrier and checkpoints, and restrictions on movement of people and goods to and from Gaza, are security measures necessary to protect its citizens.