Jacinda Ardern, 38, is only the second world leader to ever give birth while in the office.

The first was the late Benazir Bhutto, who was prime minister of Pakistan when her daughter was born in 1990.

The premier was photographed kissing daughter Neve in the main assembly hall next to partner Clarke Gayford, at a plenary meeting known as the Nelson Mandela Peace Summit, which she also addressed.

The summit was addressed by Taoiseach Leo Varadkar, who highlighted the 20th anniversary of the Good Friday Agreement.

Mr Gayford, who is a television fishing show host, tweeted a picture of the infant's UN diplomatic photo ID that classified her as "New Zealand first baby".

Because everyone on twitter's been asking to see Neve's UN id, staff here whipped one up.
I wish I could have captured the startled look on a Japanese delegation inside UN yesterday who walked into a meeting room in the middle of a nappy change.
Great yarn for her 21st. pic.twitter.com/838BI96VYX 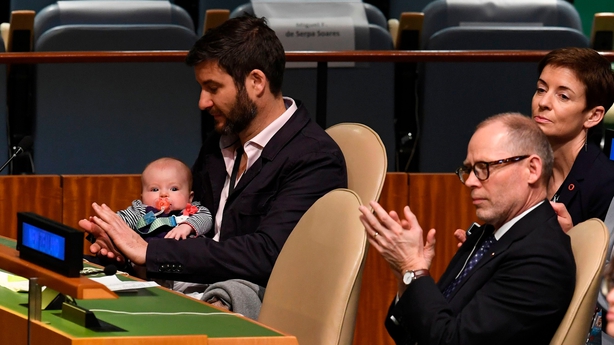 Ms Ardern became prime minister in October just three months after taking charge of the Labour Party as it languished in the polls. She returned to work last month after a six-week maternity leave.

She had already announced that they would travel as a family to the United Nations in New York, where she will address the General Assembly.

Earlier yesterday, she spoke at the launch of the annual "Climate Week" event.

Pregnancy, motherhood and her coalition government have turned her into a poster child for feminism against the backdrop of the #MeToo movement in the United States, where she is taking part in a series of media appearances.

"It felt at the time on par I have to say!" she joked on The Today Show, the flagship morning programme on NBC News, when asked what was harder - taking a three-month-old on a 17-hour flight or running the country.