Nearly 20,000 civilians fled the Syrian town of Hammouriyeh and its surrounding areas in the rebel enclave of Eastern Ghouta today for government-controlled territory, a monitoring group has said.

The Britain-based Syrian Observatory for Human Rights said thousands of displaced people had left Hammuriyeh, Kafr Batna, Jisreen and Saqba throughout the day.

It said the flow stopped at the beginning of the evening, in what it called the biggest exodus of displaced people since the regime launched an offensive on the enclave on 18 February.

The United Nations is trying to determine how many people have fled the area, according to a spokesman.

"The actual number of people who have exited Eastern Ghouta is not known, as is the destinations of all evacuees," deputy UN spokesman Farhan Aziz Haq said.

"The UN has not observed the evacuations, but is visiting collective shelters where some of the evacuees are arriving," he said.

He said they were trying to assess the needs of the shelters, including the Dwier collective centre where the Syrian Arab Red Crescent is aiding refugee families.

The World Health Organisation is sending in hospital beds, medical equipment and medicine to the centre which has medical facilities, water and electricity, Mr Haq said. 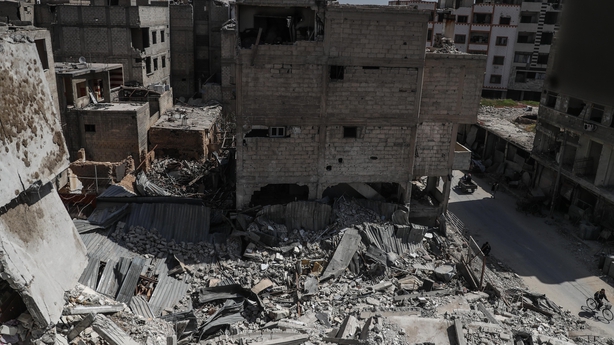 An aid convoy delivered food to some 26,000 people trapped in Douma, the main city in the besieged enclave, he added.

"However, much more is needed, including medical and health supplies, for people in need in Douma and [humanitarian] assistance throughout eastern Ghouta," Mr Haq said.

The enclave on the outskirts of Damascus has been under seige by forces loyal to President Bashar al-Assad for five years.

Air strikes, rocket fire and shells have slammed into Eastern Ghouta for nearly a month as the Syrian army pressed an offensive against the rebels.

More than 1,220 civilians have been killed in the enclave since 18 February.