British Prime Minister Theresa May has called for a snap general election on 8 June, claiming that divisions at Westminster risked hampering the Brexit negotiations.

The prime minister will require the support of two-thirds of MPs to go to the country, with a vote scheduled in the House of Commons today.

The move stunned Westminster, as Mrs May and Number 10 have repeatedly insisted she would not seek a general election before the scheduled 2020 poll.

But Mrs May, who has a fragile working majority of just 17 in the Commons, said she wanted "unity" at Westminster as talks on Brexit begin in earnest with the European Union.

Theresa May: "We need a General Election and we need one now." pic.twitter.com/8avOrhgwZj

She said: "We want a deep and special partnership between a strong and successful European Union and a United Kingdom that is free to chart its own way in the world.

"That means we will regain control of our own money, our own laws and our own borders and we will be free to strike trade deals with old friends and new partners all around the world.

"This is the right approach, and it is in the national interest. But the other political parties oppose it.

"At this moment of enormous national significance there should be unity here in Westminster, but instead there is division. The country is coming together, but Westminster is not."

She acknowledged that she needed a stronger position in the Commons to secure her plans for the UK's future outside the EU.

Theresa May said a General Election is necessary "to secure the strong and stable leadership the country needs." pic.twitter.com/xGRqofHt3L

"Our opponents believe because the government's majority is so small that our resolve will weaken and that they can force us to change. They are wrong," she said.

"They under-estimate our determination to get the job done and I am not prepared to let them endanger the security of millions of working people across the country, because what they are doing jeopardises the work we must do to prepare for Brexit at home and it weakens the government's negotiating position in Europe."

Under the Fixed-Term Parliaments Act, general elections take place every five years, meaning Mrs May would have had to carry on until 2020 before the chance to strengthen her position.

In order to call the early election, she will need the support of two-thirds of the 650 MPs in the Commons.

He said: "I welcome the prime minister's decision to give the British people the chance to vote for a government that will put the interests of the majority first."

Scottish First Minister Nicola Sturgeon said the Tories "see a chance to move the UK to the right, force through a hard Brexit and impose deeper cuts" and added "let's stand up for Scotland".

Mrs May suggested she reached her decision over the Easter parliamentary recess, during which she went on a walking holiday in North Wales.

"I have only recently and reluctantly come to this conclusion," the prime minister said.

"Since I became prime minister I have said that there should be no election until 2020.

"But now I have concluded that the only way to guarantee certainty and stability for the years ahead is to hold this election and seek your support for the decisions I must take."

Taoiseach Enda Kenny spoke with Mrs May by phone this evening and emphasised that a return to direct rule in Northern Ireland should not be contemplated.

Mr Kenny said both governments want to see an executive formed as quickly as possible.

Both leaders reiterated their commitment regarding Brexit and Ireland, including that there be no hard border and maintaining the Common Travel Area.

European Council President Donald Tusk said he had a "good" telephone conversation with Mrs May after she called for a snap general election.

Minister for Foreign Affairs Charlie Flanagan said Mrs May's call "does not change the Government's commitment to ensuring the best possible outcome for Ireland in the upcoming Brexit negotiations." 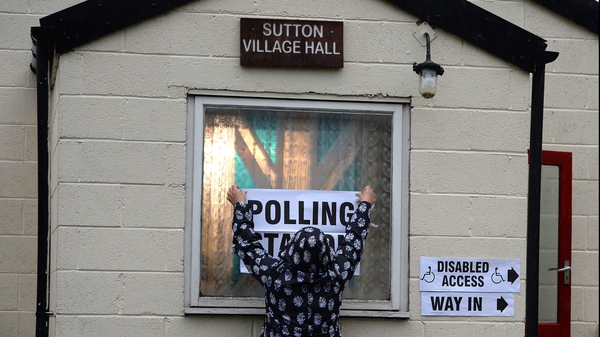 As it happened: Britain set to go to the polls as May seeks June election Politics