Turkey will help stem the flow of migrants to Europe in return for cash, visas and renewed talks on joining the EU in a deal that Turkish Prime Minister Ahmet Davutoglu has called a "new beginning" for the uneasy neighbours.

Leaders of the 28 European Union states met Mr Davutoglu in Brussels to give their collective political blessing to an agreement hammered out by diplomats over the past few weeks.

A key element is €3bn in EU aid for the 2.2 million Syrian refugees in Turkey, intended to raise living standards and so to persuade more to stay put rather than attempt the often perilous crossings to the Greek islands and the EU.

"The EU is committed to provide an initial €3bn of additional resources," EU and Turkish leaders said in a joint statement.

"The need for and nature of this funding will be reviewed in the light of the developing situation."

The final wording was a compromise between the EU, which offered €3bn over two years, and Turkey, which had pushed for the same amount annually.

Now the money, as French President Francois Hollande said, will be paid out bit by bit.

Also on offer to Ankara, which wants to revive relations with its European neighbours as it faces trouble in the Middle East and from Russia, is a "re-energised" negotiating process on Turkish membership of the EU - even if few on either side expect it to join soon.

And many Turks could also benefit from visa-free travel to Europe's Schengen zone within a year if Turkey meets conditions on tightening its borders in the east to Asian migrants and moves other benchmarks on reducing departures to Europe.

"Today is a historic day in our accession process to the EU," Mr Davutoglu told reporters on arrival. "I am grateful to all European leaders for this new beginning." 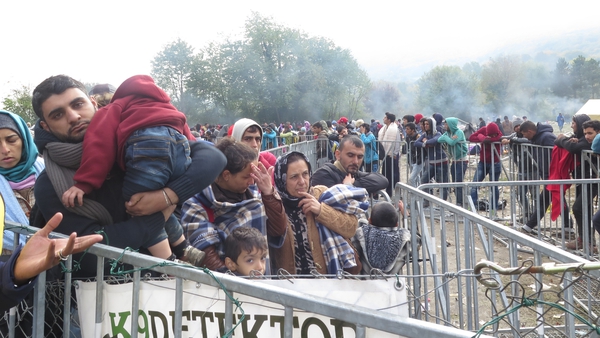