Three Ukrainian soldiers have been killed fighting pro-Russian rebels, the government said today, as fighting engulfed a key airport in the east of the country.

The latest clashes rocked a shaky truce as Ukrainian President Petro Poroshenko traveled to Italy for talks on the conflict with European leaders and Russian counterpart Vladimir Putin tomorrow.

He said pro-Russian separatists have been increasingly active in southern Donetsk region, where seven civilians died this week on the outskirts of government-controlled city of Mariupol on the Azov Sea coast.

At the airport in the outskirts of rebel hub Donetsk, AFP journalists heard intense mortar fire, but a Ukrainian flag over the older of the two terminals indicated that government forces are still in position.

The airport has been one of the flashpoints of the conflict in recent weeks, despite a ceasefire agreement signed between the two sides last month.

NATO said today that it sees no sign of any significant withdrawal of Russian troops from the Ukrainian border, despite Russia saying Mr Putin had ordered thousands to pull back.

"We would welcome the withdrawal of Russian troops on the border with Ukraine, as this would be a step in the right direction. But for the moment, we have not seen major and significant movements yet," a NATO official told AFP.

A new poll shows the number of Ukrainians in favour of joining the NATO alliance has risen sharply during its drawn-out conflict with pro-Russian rebels in the east of the country.

Becoming a NATO member would be the best way for Ukraine to ensure security, said 44% of respondents to the poll by the Foundation for Democratic Initiatives and Kiev's International Sociology Institute.

The figure showed a rise from 34% in a similar poll in May this year and 13% in another poll in 2012 by the same two institutions.

"The rise began this year. It's the reaction of Ukrainians to Russia's military aggression," said sociologist Maria Zolkina from the foundation.

It said 22% of those questioned wanted to keep an independent status, while 15% wanted closer ties with Russia and the former Soviet states.

The 2012 poll showed 26% of Ukrainians in favour of joining a Russia-led union.

The poll was carried out in mid-September on 2,035 people from across Ukraine apart from Crimea and the eastern Lugansk region, due to intense fighting.

The pollsters approximated the results for Lugansk by increasing the quota for eastern Donetsk.

The east of Ukraine is Russian-speaking and generally more pro-Russian.

Ukraine blames Russia for stirring a bloody pro-Russian insurgency in the Lugansk and Donetsk regions, where 3,600 have people died since April, according to the United Nations.

In 2010, former president Viktor Yanukovych opted for a non-aligned policy.

The new pro-Western leadership has vowed to put the country back on track to join the alliance - a sore point with Russia, which accuses the US of meddling in its sphere of influence. 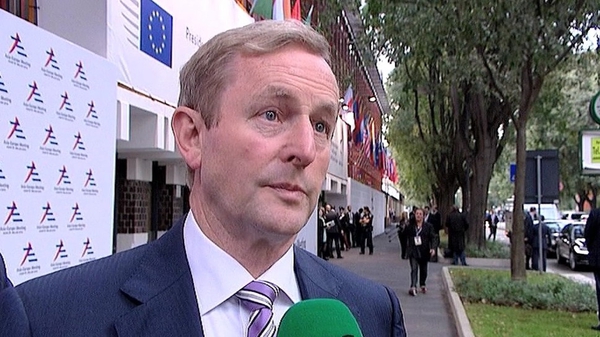