South Sudan will postpone the 2015 presidential election to give warring factions time to reconcile, President Salva Kiir has said,

However opposition leader Riek Machar, Mr Kiir’s rival in a conflict that is threatening to tear apart the world's newest nation, said the vote should go ahead.

The conflict pits Kiir's Dinka people against the Nuer of his former deputy Mr Machar, whom the president sacked in July 2013.

The pair signed a ceasefire pact in Ethiopia on Friday and pledged to hold further talks about forming an interim government to end nearly five months of bloodshed.

But South Sudan's army and rebel forces have traded blame for breaches of the ceasefire.

The rebels said government soldiers had taken control of Bentiu, capital of the oil-rich Unity state and the site of an ethnic massacre that in April raised fears of the conflict spiralling into genocide.

South Sudan became independent from Sudan in 2011. The fighting has curbed oil production, vital for its economy.

"Elections will not be held in 2015, because reconciliation between the people will have to take time," Mr Kiir said at Juba airport late on Sunday.

"The election (timetable) has to be extended for two or three years, so this interim government would remain in power and elections can be held in 2017 or 2018."

Mr Machar said: "If we could reach a comprehensive agreement, based on this roadmap, we could hold the election in 2015. That would be good for South Sudan. This is when his term comes to an end."

Mr Machar said his focus was on redrawing the constitution to establish a federal government.

"We want to restructure the state and the system of governance. Our position is that there should be a federal system in a country like South Sudan which is diverse," said the rebel commander.

Mr Machar said he was happy with the ceasefire document signed on Friday. "We negotiated tough with President Salva Kiir through the mediator. We're satisfied with this document," he said.

Colonel Philip Aguer, spokesman for government forces, said there had been no fighting in South Sudan today.

The United Nations has warned the bloodshed could descend into a full-blown genocide and trigger a famine as the violence has prevented subsistence farmers from planting crops in some of the most fertile regions.

South Sudan's economy has been hit hard by the violence, with vital oil output down by a third and cash for development and many other basic services diverted to fund the war effort.

IGAD, the regional body mediating the talks, has called on both sides to stop fighting so aid convoys can reach some remote areas ahead of the rainy season, which renders much of the Texas-sized country inaccessible by road.

The United States and European Union states, which have been pressing hard for a deal, welcomed Friday's agreement and called on both leaders to issue immediate orders for calm.

Western powers were instrumental in South Sudan gaining independence and trumpeted its creation as a policy success. 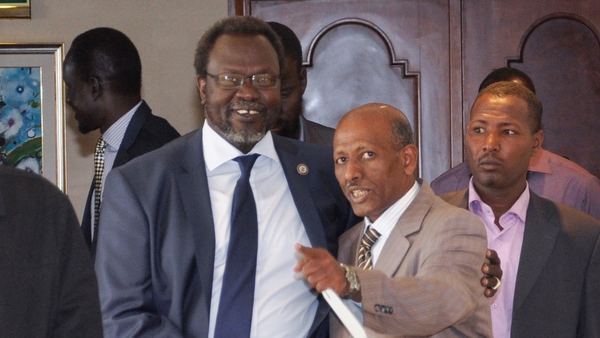