A Pakistani schoolgirl who underwent reconstructive surgeryafter being shot in the head by the Taliban said she felt much better and was focused on her mission to help others.

Speaking clearly, but with the left side of her face appearing rigid, 15-year-old Malala Yousafzai said she is "getting better, day by day" after undergoing weeks of treatment at a British hospital.

She said she would keep up the same campaign that led to her attack.

"I want to serve. I want to serve the people. I want every girl, every child, to be educated. For that reason, we have organised the Malala Fund," she said in the video, made available by a public relations firm.

Malala drew the world's attention when she was shot by Taliban militants on 9 October while on her way home from school in northwestern Pakistan.

The Islamist group said it targeted her because she promoted girls' education and "western thinking".

She also criticised the militant group's behaviour when it took over the scenic Swat Valley where she lived.

The shooting sparked outrage in Pakistan and many other countries, and her story has captured global attention for the struggle for women's rights in her homeland.

In a sign of her impact, the teen made the shortlist for Time magazine's "Person of the Year" for 2012.

"Today you can see that I am alive. I can speak, I can see you, I can see everyone," Malala said.

"It's just because of the prayers of people. Because all people, men, women, children, all of them have prayed for me. And because of all these prayers God has given me this new life, a second life."

Malala was airlifted to Britain from Pakistan in October to receive specialised medical care and protection against further Taliban threats.

She is expected to remain in the UK for some time as her father, Ziauddin, has secured a post with the Pakistani consulate in the English city of Birmingham.

Birmingham's Queen Elizabeth Hospital, which has been treating the teen, said it successfully operated to reconstruct her skull.

Doctors said Malala also had a cochlear implant to restore the hearing in her left ear, which became deaf as a result of the shooting.

Both of those operations were completed on Saturday. The public relations firm Edelman said Malala's video statement was shot earlier, on 22 January.

Dr Anwen White, a neurosurgeon who led the operations, said the teen did not suffer any long-lasting cognitive damage.

She does not require any further operations and can hopefully return to school soon, Dr White said.

The Malala Fund is a girls' education charity set up in late 2012. It was launched with a $10m donation from Pakistan. 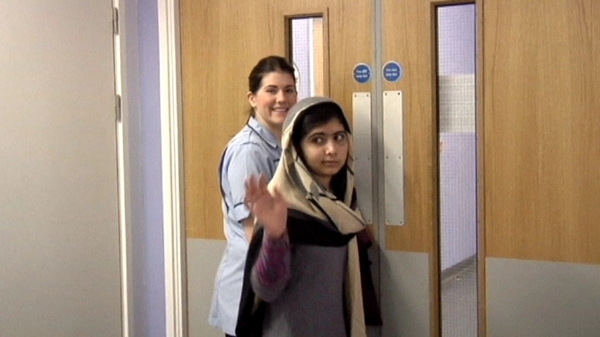